Stories of the Field of Crosses - B 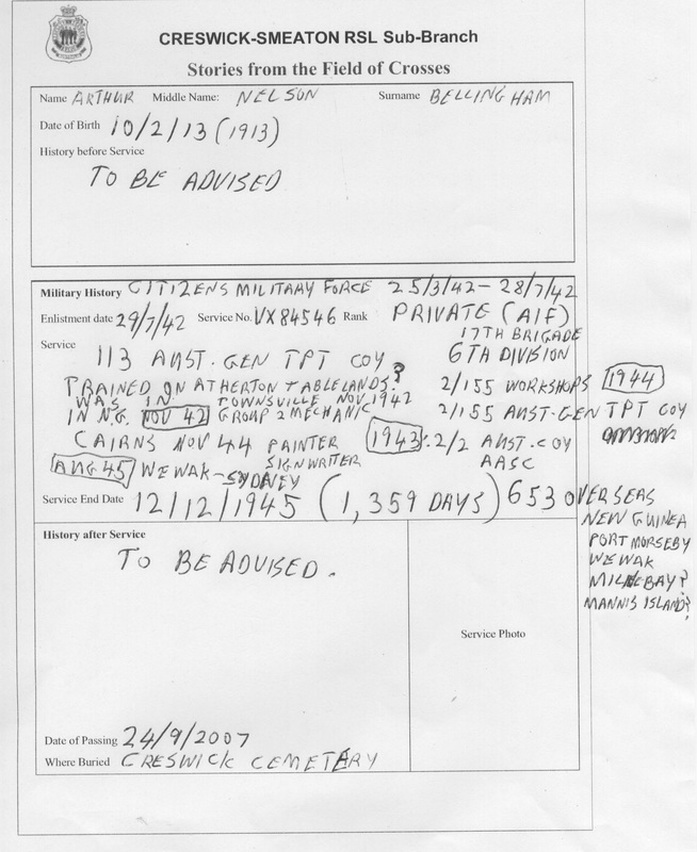 Arthur was born in Creswick on 10 February 1913. His father, Stanley, was a blacksmith whose own father was killed in the New Australasian Number 2 Mining Disaster at Creswick in 1882.

Arthur was one of 8 children and grew up in North Creswick. During the depression in the 1930s he panned for gold and grew potatoes. Like many workers at this time his hours were cut so a second person could job share rather than be unemployed.

Arthur had met Dorothy Young who lived in Clunes and worked at a sock factory there. After a long courtship they were married on 13 July 1935. Dorothy was a little older  than Arthur and remembered seeing men marching off to the first world war from Clunes. Her primary school made small treats to send to the troops in care parcels. By the time Arthur enlisted they had 2 children and a partly built house in North Creswick. Arthur was active in the Local Masonic Lodge and Scout group and played football and cricket for Creswick.

Arthur enlisted in  Citizens military force  in January 1942 Dorothy was in Geelong West as Arthur had moved there to work, as there was no work for him in the Creswick/Ballarat area at that time. On his enlistment papers he is listed as Grocers Assistant, 28 years 10 months old. His record shows he was unavailable for full service before July 1942 because of illness Chicken Pox? and on 29th of July 1942 Arthur was enlisted in the AIF. Dorothy had now moved back to Creswick with the boys and would have been well into her third pregnancy.

While doing basic training at Sorrento(?) Arthur’s company spent over a day learning how to salute.  This did not go down well with Arthur and he wrote a letter to Dorothy telling her what a waste of time learning how to salute was.  As all mail was censored, Arthur was called in front of his commanding office and showed him his letter to Dorothy with all the bits complaining about saluting training carefully cut out.  His commanding officer chastised him for writing such things and asked if he still wanted the letter sent.  Arthur told him it was hardly worth it as there was not much left.

When first enlisted Arthur had slept on concrete at the MCG

Arthur went to Brisbane, Townsville and Herberton on the Atherton Tablelands to continue training. While in Brisbane he spent his weekend leave with his sister and brother in law and helped at their hotel. In New Guinea he was at Port Moresby, Lay and Aitipie.  At this time he was working as a driver and in aircraft maintenance. In January 1943 He received a letter of commendation after impressing the commander of a division where he was sent for a short period.

When Arthur was deployed to New Guinea his unit was sent to the Kakoda Track.  As Arthurs role was with transport and the vehicles were no use on the track he was stationed with the militia.  There was a degree of animosity between the militia and the AIF.  One day when the Japanese strafed the airbase where he was stationed, a tracer bullet set his tent on fire.  The commanding officer docked Arthur and his tent mates pay as he insisted that he must have left a cigarette burning in the tent.  This was despite Arthur and his tent mate being few of the soldiers that did not smoke and was why they bunked together.

While stationed at Milne Bay, bombings of the airfield by the Japanese were a regular occurrence.  Normally the soldiers will run for slit trenches and cover their heads when the bombers came.  On one occasion there was a fleet of US Airacobra fighters at the airfield when the air raid siren rang.  The fighters started their engines and taxied to take off.  Instead of heading for the slit trenches, Arthur and the other soldiers thought they would stay and watch the fighters fend off the bombers.  The fighters took off and flew out to sea as the soldiers had to then run to the trenches as the bombs started.  After the raid the fighters returned and landed.  Arthur asked one of the American pilots where they went.  He told Arthur that they had been ordered out to sea to protect the fighters. After that day they were known by the Australians and the “Fishing Fleet”.

Arthur used to make a little extra money to send home by spending his spare time making trench art souvenirs to sell to other soldiers, particularly the better paid Americans.  He would make items such as toy aircraft like flying fortresses, Lockheed bombers, money boxes, Pencil cases, match box holders, napkin rings and pin boxes out of bullets, aluminum and Perspex from crashed aircraft and coconuts.  Some of his trench art was sent home as gifts for his family. As mentioned above Arthur did not smoke and was able to trade his Rations of Alcohol and Cigarettes for materials to make the Trench art.

When the company spray painter was sent home with malaria, the company was asked for a volunteer with spray painting experience to take his place.  Arthur had always wanted to learn how to spray paint, so he said he had had some experience and taught himself on the job. He also later attended training in waterproofing Jeeps and in Painting numbers on these vehicles.  This was to have implications later when he was stationed in Queensland waiting for demobilization.  During this time, Arthur used to make some extra money to send home by washing glasses in his nephew’s pub near the base.  The problem was that the spray painters had to drink a glass a milk a day.  As Arthur was not supposed to be washing glasses at the pub he would have to sneak back into base at the appointed time to get his allocated glass of milk before returning to his job washing glasses.

Arthur was home on leave on VE Day and decided he would take his eldest son Brian into Ballarat that day as there was to be a huge party. He went across to the North Creswick School but had to argue with the schoolmaster to let Brian go early. He succeeded eventually and he and his son had a wonderful day.

In the later part of Arthur’s time in New Guinea, he took the time to further his education with some correspondence courses.  It had always been Arthurs ambition to own a grocery store so he undertook business studies and sign writing via correspondence.

Arthur returned to work initially with the Forest Commission at their Creswick Nursery and then planting trees out at Mt Beckwith near Clunes. Later he returned to work in the Grocery industry at companies such as B.W. Farmers, Ritchies SSW in Bridge St, Vickerys Regal products and the Ballarat Grocers Co-op. Arthur Also used his Army skills as a signwriter to make advertising signs for local supermarkets. Arthur also drove the Creswick school bus (Davis Buslines) to Ballarat each day. Arthur Retired in 1978

After the war, Arthur was disappointed at the way the members of the militia were treated by some people. He had seen the way they had fought in New Guinea before the rest of the AIF got there.  It took some time before he felt they were given the recognition that they deserved. This could be part of the reason he did not join the RSL until the 1950’s. Once he Joined he became a very active Member.

Utilising his signwriting skills from about 1964  he started to make small white wooden crosses with the names of deceased Creswick RSL members/local soldiers neatly painted on them. He continued to add names as ex soldiers passed away each year until his own death in 2007.  He rarely wore his medals at remembrance events and his grandchildren remember that he never discussed his war service until the mid 70’s when one of his granddaughters  was to go on a student exchange in New Guinea. He spoke often to her of his experiences and slowly started to discuss his war service with the rest of the family.

Arthur passed away on 24 September 2007 and is buried with his wife Dorothy at Creswick Cemetery.