Tuesday March 18 1919.
The meeting of returned soldiers and sailors convened by Rev F. H. Ingamells (late Chaplain Major of the A.I.F.) for the purpose of considering the advisability of forming a Creswick district branch of the Returned Sailors and Soldiers Imperial League of Australia, was largely attended at the bank chambers on Thursday evening last. Besides the returned men of the town, several of the district soldiers and one sailor were present. The Rev F.H.Ingamells was elected chairman of the meeting. He said he had seen the need of calling the men together with the idea of establishing a branch in Creswick , as he considered Ballarat, where there was a branch, too far away from Creswick and the district for the men to receive any benefit from it. He thought a branch could be formed in Creswick and he had written away for particulars regarding its formation. A requisition form was sent up for the signatures of of intending members, and he thought they would have no difficulty in having permission granted for the forming of a branch. A branch in Creswick would be for the returned men’s protection and interest. One gentlemen of the town, Mr J. A. Graham , had offered to finance the branch to a certain extent. Out of the annual subscriptions the branch would be able to retain two thirds . They would have the good will of the people of the town and district. Some residents wanted to see them start a clubroom, and would be willing to assist them in doing so. Ballarat was too far away from Creswick and it meant if members wished to attend a meeting of the branch there they practically had to lose two days, whilst members of the district were tied to catching certain trains. He asked for a motion as to whether a branch be formed or not.

Mr H Symonds moved that a sub branch be formed in Creswick. He thought it would be a good thing for their own protection and interests. He made it clear that the branch be under the direct supervision of the head office and not under the jurisdiction of the Ballarat branch; the branch to be called the Creswick District Branch. Mr H. Praetz seconded the motion which was unanimously carried. It was pointed out that where a returned soldier or sailor was at present a member of a branch in any part of Australia, there were transfer forms available, and they could transfer to the branch in the town they resided in. The election of officers resulted as under :- President Rev F. H. Ingamells was unanimously elected. For Vice President Messrs G. Cawthan, H.V.Malone and V. James were nominated, and on a ballot being taken the two former were elected. Messrs V. James, H. Symonds, F. James, H. Praetz, A. Talk, A Wright and W. Sherriff were nominated for the five positions on the committee , and the ballot was in favour of the first five. For the position of Secretary there were three nominated, viz:-Messrs H. Wood, J. Keating and H. Praetz and the ballot was in favour of Mr Wood. Treasurer:- Messrs J.Keating, A. Wright and H.

Praetz went to the ballot and Mr Keating was chosen. The Rev F.H.Ingamells thanked them for electing him as president of the club. He intended to do all he could for the club, and with their assistance they were going to make it a live concern. They would put all their interest in the club, so as to give the men who were still away a good welcome back to the district. They would need all the assistance they could get. He hoped they would make the club in no way a political branch. He pointed out that he wanted to be as the little leaflet said :- “Continue the brotherhood formed on active service by becoming a member of our league, and by combined effort protect the interest of our maimed or blinded comrades, and the dependants of those who have made the supreme sacrifice".

If there be any obligation upon the citizen to redeem his promises made to soldiers, what is our share of the responsibility? We are bound or should be bound, by the strongest of ties - stronger than any word of mouth or signed document – bound together by ties of men who have offered or shed their blood together. Let our badge be the emblem which will stand for justice and fair treatment for returned sailors and soldiers, and the widows and orphans of fallen comrades.” That was what he was out for, and intended to stick with it.

There would be no professionalism as far as he was concerned as president. He was not going to preach to them, but was there among them as a returned man. He thought a nice club room could be fixed up in one of the empty shops in the town where pleasant hours could be spent by them.

Mr Cawthan moved that failing to get permission to form a branch of the R.S.S.I.L. they still carry on with the club with the officers they elected that night. Carried unanimously.

Mr D. Curran of Smeaton, who arrived late was informed that it was decided to establish a branch, and he replied that it would be a splendid idea, and especially as far as the district returned men were concerned, as Ballarat was too far away.

At still a latter stage three more returned soldiers put in an appearance, and on being informed of the business transacted, one did not see why they wanted a branch in the district. The matter was debated with him, and Mr Cawthan said there were good reasons for forming a branch in Creswick. In the first place it was handier than Ballarat for the district members. They wanted a place where they could meet. They had been united on the other side, and they would have to remain united in Australia to see they got their rights. He understood there was a large number of returned men in the district, and he could vouch for at least 20 from the Sutton Park Estate, Newlyn joining the branch. He also stated that if a member went to any part of Australia where there was a branch he could transfer if he desired, whilst the badge would admit them to any club of the R.S.S.I.L. The meeting was then adjourned.

Tuesday April 8 1919.
A special meeting of the Creswick Borough Council was called for last Friday evening. The purpose of the meeting was primarily to receive a deputation from the committee making an appeal for funds for the erection of an infectious diseases ward at the Creswick District Hospital, to be called “The Soldiers’ In Memorium Ward.” Two other deputations were also to wait on the council - one from the Peace Celebrations Committee, to ask how far the council would go in paying for the celebrations in the borough; and the other from the Creswick District branch of the Returned Sailors and Soldiers Imperial League of Australia, with a request for the temporary use of the rooms in the south west corner of the Town hall building. The council meeting was convened for 8 o’clock. The (Cr. Alex Broom) and Cr Tait were the only councillors in attendance up to 8:50 PM , when the Mayor declared the meeting adjourned till the ordinary meeting on Tuesday the 15th April. Cr. Wilson arrived shortly afterwards.

21 April 1919
The Creswick district branch of the Returned Sailors and Soldiers Imperial League of Australia intend approaching the Borough Council with a request that the temporary use of the rooms in the south west corner of the Town hall buildings be granted to them. The members will require to furnish these rooms, tables, chairs etc. being required, and they make an appeal to the general public for help in that direction. They will be pleased to receive suitable gifts; second hand furniture will be welcome.
Creswick-Smeaton RSL Centenary official ceremony
16th March 2019 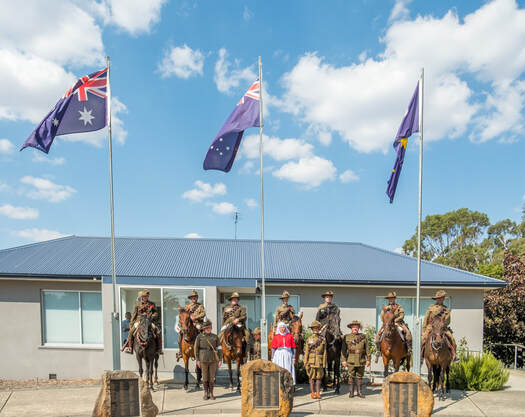 In the last year, I have travelled the length and breadth of the State to attend RSL Sub-Branch meetings and many centenary activities. More than 30 to date but only a handful in the metropolitan area. In addition to reflecting on the work of all the generations of volunteers who have gone before us, I often talk about the objectives set for us by the League founders in September 1915.

Just a repeat of those original objectives: - the language is a bit quaint
To foster a spirit of loyalty to the King and to cultivate an Imperial sentiment,
to keep green the memory of fallen soldiers,
lend a helping hand to deserving comrades,
help one and other in fighting the battle of life, and
assist members in obtaining employment,
to foster and encourage the universal defence system,
to establish benevolent and funeral funds and
secure naval and military funerals,
to hold social reunions and assist in patriotic and charity movements.

And then I look at the work that the RSL does in our communities and see that these original objectives are still the driving force of the organisation – we might express them a little differently but they are still what we do, every day, looking after our mates who have served the nation.

I particularly wish to thank all our volunteers for their work on behalf of the League and the assistance that they provide at both Sub-Branch and Branch level. You work tirelessly to make the lives of our veterans and their families better.

To the Sub-branch, its officers and members and all those who have gone on before - I congratulate you on 100 years of looking after your mates and being a valuable partner in your local community! Keep up the good work.
Hon. Catherine King MP - Ballarat

AcknowledgementsToday we come together to celebrate the 100th anniversary of the Creswick-Smeaton RSL.

100 years ago this region's survivors of the First World War came together to support one another and to honour the memory of those who never came home.

For 100 years this organisation has lived up to these lofty goals of remembering the fallen and supporting those who are still here.

It has supported veterans and their families from every conflict that Australia has been involved in, from the First World war through to the conflicts of today.

We know that veterans returning home face significant challenges, whether that is in finding work, or dealing with the mental health challenges that come with facing and surviving  danger in warzones.

It affects families and it affects generations.

These are struggles that can last a lifetime - and the RSL provides a place where challenges can be overcome and members can lend one another a hand.

The challenge of supporting our returned service people is one that the Creswick-Smeaton RSL has ably confronted over the past 100 years.

It has overcome difficulties, it had supported communities, and it has made a real difference in the lives of many.

Today, the RSL is still doing so much, and will continue to do so well into the future.

Well done to all of those who are involved in the RSL, in particular Alan Morris, the President, and his board.

You have all continued the great work of this organistono.

With that, I wish the creswick-Smeaton RSL a happy birthday, and I look forward to see you continuing your great work over the years to come.
Following the cutting of the cake, afternoon tea was served with the songs of the era being played by the Creswick Brass Band. 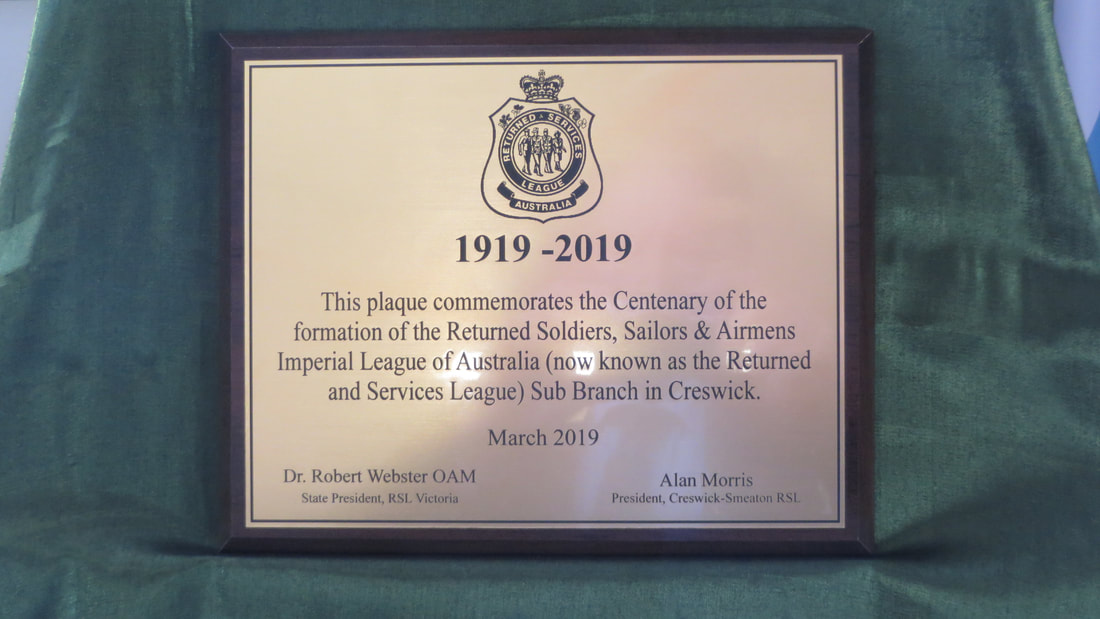