The Creswick Community can be justifiably proud of how it comes together on 25 April to remember and honour the sacrifices of their forebears. A record number of people attended the march and the commemorative services.

The Cenotaph looked magnificent after much hard work by RSL members and the council, aided by a Commonwealth grant.

Some snapshots of what makes our day in Creswick so special:
- The entire under - 18 football team among the 300 people at the Dawn service;
- The new light over the "Field of Crosses" donated by Jimmy Pasco;
- 7 new crosses made by 93 year old veteran Arthur Bellingham;
- 22 year old Susie Koene playing Lost Post on a 100 year old bugle;
- 200 people at the Farmers Arms Hotel for the Gunfire Breakfast. Lyn and Ed Koene and their staff were up at 4:00a.m. and      gave their time.
- Creswick Band playing beautifully at march and service;
- St. Johns Choir leading the singing;
- The Creswick Lighthorse Troop, mounted and on foot;
- Rob Dixon, as the guest Speaker, talking about Kokoda;
- Alex Mold and Caelli Greenbank who read the Requiem and Pam Colgate's poem - March of the ANZAC's;
- Creswick Red Cross and morning tea;
- 20 Vietnam veterans form around Australian flag to honour Jeff McMillan, the RSL's past president. Until his illness last year,  Jeff had been president for 36 years. A special presentation was made to Jeff, and the Lighthorse paid tribute via a ride past  and three cheers.

Our visiting Vietnam veterans commented it was the best day they had ever attended.
2007

The Creswick Brass Band led the ANZAC march, followed by the Creswick Light Horse, RSL members and their families, primary schools and community groups, concluding at the town’s Cenotaph.

The Creswick-Smeaton RSL has now handed over the running of the ANZAC Day service to the youth of Creswick.  This year’s Master of Ceremonies was Captain Mark Spenceley, Creswick UFB.

Following the National Anthem, Kirily Greenbank read out an ANZAC message sent to Creswick from her sister Caelli, who won the Victorian Spirit of ANZAC Prize and who has been visiting the WWI battlefields and cemeteries in Turkey, France, and Belgium.  Caelli attended the London Dawn Service and ANZAC service at Westminster Abbey. Her message read:

“They were young, they were brave, they were willing to make the ultimate sacrifice.  And, most of all they were Australian.  These are things you can only get a grasp on, only truly begin to understand, when you have been there for yourself and felt it.  And now I have.  Standing on the beach at ANZAC Cove it’s hard to imagine how they say it used to be, that the water ran red with blood and the air rang with the sound of bullets.  There is such an overwhelming sense of peace there.  The beach is only 2 metres wide, and you can stand at the base of the cliffs and understand exactly how the ANZAC’s felt when they looked up and said, “We've got to get up there now”;  having climbed one of the hills near ANZAC Cove you can get an idea of just what kind of war they were fighting.  There are hills and valleys everywhere, and whoever commanded the hills commanded the battle.  It gives real meaning to why places such as the Nek and Quinns Post were so important.   And then it occurs to you that they stood where you are now, and you have to stop and think for a minute. The ANZAC’s gave so much for us.  The youngest was younger than me when he died.  Pve James Martin was only 14.  One can only truly understand all this when they’ve been here, but the most humbling thing is, they did it all for us.”

Following is an extract of his speech:

“Since we became a nation and until present time the Australian Digger has remained the same, carrying on the strong traditions and maintaining the same larrikinism as went on before. His mates always came first and a joke and a laugh seems to be the answer to everything, even in adverse conditions.

“The Australian Digger today still relies on his own initiative and good old Aussie nous to make conditions better for him and his mates.

“Today’s modern day armies aren't all without facing each other and facing the enemy on the battlefield. We have seen this in operations in East Timor, Iraq and Afghanistan. The enemy cannot be seen and soldiers must be on their guard and Section Commanders like myself must be able to make quick decisions.

“During my service in the army I believed that I have followed in the steps of my forefathers, I have patrolled the same steps of the 2nd 2nd and 2nd 4th independent companies. In Timor, I’ve trekked along the Kokoda Track like the 39th, 2nd 4th and 2nd 16th battalions. I have been privileged to walk along the Burma Railway and reflect at “Hellfire Pass” and as you are all aware I have served this great nation in the Middle East in the 9th Division.

“I consider this a great honour and privilege to be given this opportunity to speak to you on this very special day.”

Creswick North Primary students Jordon Gibson and Marty Williams read “Do not stand at my grave and weep” followed by Pastor Joy Robinson who delivered the prayer for the fallen.

Captain Spenceley thanked the Creswick Brass Band, St. Johns Choir, all who assisted in the service and the people who lined the streets and joined in the service for their acknowledgement of our Veterans.

Following the service, a wreath laying ceremony was held at the memorial stones in front of the RSL. 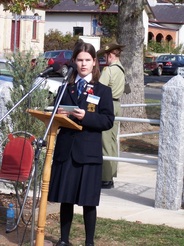 Caelli Greenbank
2008
At 10 p.m. a wreath was place near the memorial stones in front of the RSL Hall before the Parade assembled at the bridge to march up Albert street proudly led by the Light Horse Troop, the stirring music of the Municipal Band in their splendid new uniforms kept the marchers in step. the number of marchers is growing, with many local organisations and relatives who helped swell the ranks of serving members and the gradually decreasing WWII veterans.

The tradition of handing over the ANZAC Day service to the young people of Creswick continued this year with Stephanie Geotze-Theiss form the Creswick Youth Theatre as MC.

Guest speaker 15 yo Caelli Greenbank who, last year was one of ten young people who won the Premiers Spirit of ANZAC Prize. Part of their prize included a visit to the War Cemeteries of Europe for ANZAC Day. Before going overseas each student researched a fallen serviceman's life and the letters sent to their families. They were then able to visit that memorial on behalf of the serviceman's families. There were many damp eyes as Caelli reported, among all those listening to her wonderful story of the various places she had visited, and the reception given by the thankful villagers who had been saved by the young ANZAC's on the Western Front.

After the laying of wreaths on the Cenotaph, the service was ably concluded by representatives from the local schools. many of the five hundred plus who attended the Ceremony were then made welcome at the RSL hall for refreshments. Our local baker had donated a delicious spread, which was served up by members of our Red Cross Unit. The Senior citizens' choir led an enthusiastic sing-along of military songs.

The RSL President, Jack Sewell thanked all who helped make Creswick's ANZAC day a must attended event, especially the young people who will carry on the tradition.
2009

No information available
2010 - The Creswick community can be justifiably proud of how it comes together on 25 April to remember and honour the sacrifices of their forebears. Around three hundred and fifty people attended the Dawn Service, the march and commemorative service. at Kingston twelve people were present at the Avenue of Honour.

The Cenotaph looked magnificent after much hard work by Brian and Josie Reasons and the council. Some snapshots of what makes ANZAC day in Creswick so special:

* The entire Creswick Football Club at both services and helping the ageing RSL members pull down the gazebos and packing up the chairs. Many thanks;
* The Creswick Light Horse Troop supplying and erecting the gazebos to provide shelter;
*Stan Hepper and Creswick Signs making new crosses and repairing old ones;
* Two hundred plus people at the Farmers Arms Hotel for the Gunfire breakfast. Lyn and Ed Koene and their staff up at 4.00am;
*Creswick band playing beautifully at march and service;
*St. John's choir leading the singing;
*The Creswick Light Horse Troop, mounted and on foot;
*Margaret Giles and Gary Chandler, who so ably led the Main and Dawn Services;
*Amie Sexton, as the guest speaker at the main service, giving the younger generations perspective of ANZAC Day;*Yazmin Bowyer and Rebecca Plier who read the Requiem and Pam Colgate's poem, March of the ANZAC's;
* Creswick Red Cross and morning tea;
*Last, but certainly not least, Frances and Ted Powlett, owners of the The Laurels at Learmonth, allowing Ken and Daphne McMillan to select and pick over 2,500 laurel leaves so the veterans' widows and their helpers could make twenty five wreathes.

Creswick, your forebears are as proud of you as you are of them!