No information available
2012
It was a lovely morning of warming sunshine which welcomed as even larger crowd than usual to Sunday 11 November Remembrance Day. The Creswick RSL Light Horse parade with twelve fully equipped mounted troops, adding an extra spectacle to a solemn occasion.

The immaculately-timed service was concluded by the sounding of the town fire siren to signal the silence of remembrance. RSL president Michael Clark, assisted by veteran Allan Morris, conducted the ceremony at the Creswick War Memorial. it was a ceremony to remember the sacrifice of all those who have served and died in the number of wars and engagements in which Australia has been involved.

In giving thanks to all those who assisted in the ceremony, the President acknowledged the work of the Garden Club in preparing the many wreaths laid by community organisations, and also the attendance of Creswick primary school captains.

Following the ceremony, fellowship was enjoyed at the RSL Hall, where the crowd was delighted to mix with the mounted light horse members. Cameras were busy at such an opportunity. A BBQ lunch was later enjoyed by all.

We are here to commemorate the 97th anniversary of the armistice (an agreement to halt hostilities between warring parties), which ended the First World War.

World War I began in 1914 (101 years ago) and lasted for four years.  More than 60000 Australians were killed, many more were wounded and many more suffered for the rest of their lives.

At 5am on 11 November 1918, the German government representatives accepted the Armistice terms presented to them by the allies.
The armistice became effective at 11am the same day, and as the guns fell silent on the Western Front in France and Belgium, four years of hostilities ended.

In Australia and the other allied countries, 11th November became known as Armistice Day, a day to remember those who died in World War 1.

After World War II the Australian Government agreed to the United Kingdom's proposal that Armistice Day be renamed Remembrance Day to commemorate those who were killed in both World Wars.

Today the loss of all lives from all wars and conflicts is commemorated on Remembrance Day in Australia and the other commonwealth countries.
As a mark of respect to those who have died and suffered, we will be observing one minute’s silence at 1100 to reflect on the loss and suffering caused by war.

We will start by honouring one of our local heroes whose name appears on this cenotaph here. We intend to honour each hero in turn during each ANZAC and Remembrance day service from now on.

Today we honour Archibald Anderson, he is the first name on our cenotaph here
He was born in August 1891 and was a Chemist's Assistant when he enlisted on 30 June 1915 aged 24 years and 10 months with the 8th Battalion as a Private
He embarked from Melbourne on the 27 September 1915 on HMAT Hororata
On 14 January 1916 he was admitted to hospital with mumps in Alexandria Egypt.
He landed in Marseilles France on 27 March 2016 as part of the 24th Battalion.
On the 24 August he was wounded and taken to the 44th Causality Clearing Station where he died of his wounds on the 25 August 1916.
He is buried in the Puchevillers Military Cemetery , France

I would now like to hand over to these children from all of our local schools who are going to recite some poems and read their thoughts about remembrance day.

Creswick Primary School - We Shall Keep The Faith by Moina Michael. (Alex Davies and Grace Charry)

Ladies & Gentlemen we will now commence  laying the wreaths

Could you all please be upstanding for;

Thank you for attending our service today. 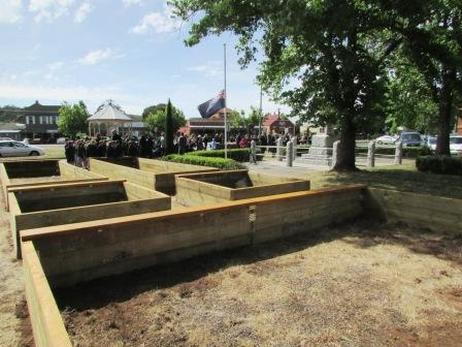