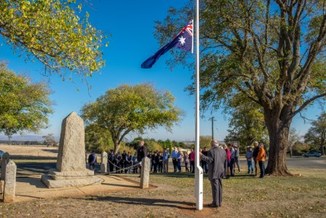 They went ashore under the cover of darkness but as morning dawned they realized that they were overrun by the enemy and were in a fairly hopeless position.

Consequently, this unsuccessful campaign lasted much longer than the Allied Command had expected. Eventually, the withdrawal of troops from Gallipoli Peninsula occurred on 20th December 1915, nearly 8 months after first landing at ANZAC Cove.

The total losses for this campaign were:
Today 101 years after that day when the spirit of the ANZAC was formed we remember all those men and women. Many of these Australians and New Zealanders were just starting their lives and had not even reached the age of 20. Their lives were taken from them so that we could enjoy the peaceful life that they never would.

The spirit of ANZAC that they formed will never be forgotten and we should also remember the many lives that have been lost in conflicts during the past 100 years since that first landing at Gallipoli.

LAYING OF THE WREATH
Cr Greg May . Others
ANZAC Day March​ 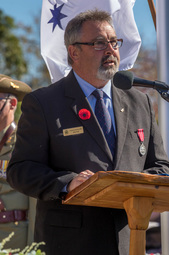 WELCOME
Distinguished guests, ladies and gentlemen, boys and girls. On behalf of all the Creswick-Smeaton RSL members I would like to welcome you to this Commemorative ANZAC Day Service.

As you know, on ANZAC Day, traditionally we gather to remember those who served and died in the Great War of 1914 to 1918 and the Second World War of 1939 to 1945.
There have been many conflicts since the two major world wars. The Korean War was fought over a period of 3 years  from 1950 – 1953. There were 340 Australians killed and 1216 wounded; 33 New Zealanders killed and 79 wounded. Let us not forget these sacrifices that were made by our ANZACS for a war that has not resulted in peace between the two Koreas still today.
​
This year marks the 50th anniversary of the battle of Long Tan in Vietnam.
The Vietnam War started in 1962 and lasted until 1972. This war resulted in 500 Australian killed and 3129 wounded.
The 18th August 1966 and saw the action of 108 ANZACS against a Viet Cong (North Vietnamese) force estimated at between 1,500 and 2,500. The Battle was one of the heaviest conflicts of the Vietnam War as well as one the few battles in the recorded history of the world to be won against such odds.
18 Australians were killed and 21 wounded in this battle.
Let us not forget the many brave ANZACS who took part in this war.

While the hymn is being sung, could I ask that all of the people laying wreaths please make their way to the front in front of the cenotaph. 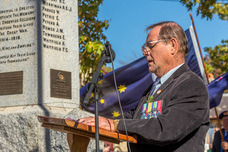 INTRODUCTION OF GUEST SPEAKER: MR PETER STARR
I will now introduce our guest speaker Mr Peter Starr. Mr Starr was born in Adelaide and grew up in the South Australian river land.

He joined the Royal Australian Navy in March 1969 and did his basic training HMAS Cerberus prior to being posted to the Destroyer Escort HMAS Yarra. He served on the Yarra for 11 months during which time the ship did a tour of duty in the South East Asian Strategic reserve, this included escorting HMAS Sydney into Vietnam.  Mr Starr attended specialty training at HMAS Watson in Sydney as Radar Plotter and was then drafted to HMAS Stuart . During this time he was promoted to the rank of Leading Seaman then drafted to HMAS Melbourne with another tour of South East Asia.

He then went to HMAS Lonsdale where he decided to leave the defence force. Mr Starr did a number of different jobs before starting out in business for himself eventually moving to Ballarat for family reasons where he ran a successful business in small maintenance and renovations. He then joined the Ballarat branch of the Vietnam Veterans Association Australia where he is currently the secretary………Ladies and gentlemen, Mr Peter Starr.

Rick, council, guests, visitors, members of the Creswick RSL, ladies and gentlemen boys and girls I thank you all for being here today and I wish to especially Thank the Creswick RSL for inviting me to speak. It’s a great honour and privilege for me.
We come together on this day each year to think of those who Australian Service men and women who have given their lives in order that we may live in peace and prosperity given to all those that reside here.

As I reflected over the years of conflict that the Australian forces have been engaged in I see the commitment determination and ingenuity of the ADF personnel.

The landing and with drawl of ANZAC Cove, the charge of the Light Horse at Beeth sheba those on the Western front and great leadership such as Pompey Elliot Monash who was instrumental in the end of the 1st WW.

Those who fought in the 2nd WW of those who endured much as prisoners of war under the Japanese, those who were poorly equipped and trained stood at Kakoda and held an enemy who had been unstoppable, those who were surrounded and forced to live in fox hole at Tubrook, when called rats by their enemy took it on as a badge of honour and still feel pride for their achievement. Those who fought in the Mediterainean and Europe.

Commitment to the United Nations saw our troops fighting in Korea under the UN Flag. The spread of communism saw our troops in Malaysia, then Vietnam. Those who served in Timor to support the development of a young nation. We supported our allies in Iraqu and Afghanistan, we have troops fighting pirates and drug traders.

This year marks the 50th anniversary of the battle at Long Tan. This battle took place on the 18th of August 1966. It was significant as it was the first major battle the Australian defence Force was engaged in during the Vietnam War.
For those who are unfamiliar with this event I would like to give a short account of the battle.

The 6 RAR had been in Vietnam a few months where they had established a secure compound at Nui Dat. This compound was in an area held by the North Vietnamese Army. The Vietnamese decide that they needed to move the Australians out.
On the 17th they started to shell the Australian compound with mortars and engaged with heavy machine guns, the Australians stood to but no enemy came forward.

B company was sent out to patrol the area and found the positions used by the North, no enemy were found.
D Company  was sent to relieve them at  11:00 0n 18th and patrol the rubber plantation at Long Tan which was nearby .The North had devised a plan to lure the Australian into a set ambush. At 3:00pm 11 platoon made contact with the enemy the rest of the company continued along the plantation. They quickly came under heavy fire from the enemy, mortars heavy machine guns and rifle fire.

They were in danger of being overrun by the Vietnamese, artillery  support from 2 Australian field battery’s was called up, N.Z.  spotter had the shells fall close to the Australian position this prevented the troops from being over run. The weather was becoming adverse as a tropical rain storm was closing in, the plantation became very gloomy. The troops were running out of ammunition and had sustained casualties who needed attention.

RAAF helicopters were sent resupply them. The choppers had to fly just above the tree top because of the weather conditions making them vulnerable to enemy fire, they resupplied with ammunition and blankets for the wounded.

B Company was order in to support D Company and A company 3 troop was ordered in with their armoured personnel carriers , the heavy rain caused flooding and  the troops had to dismount and to close in on foot.

By 7 pm the Vietnamese were gathering for another assault but seeing the re-enforcements coming in in a pincer movement with drew from the engagement.

On the 19th a patrol was sent back to the rubber plantation to collect intelligence. They found 245 Vietnamese dead and signs of many wounded and the removal of some of the dead. They also found information that indicated that 108 Australians had face about 2500 Vietnamese. Australian dead were 18, 17 from D Company and 24 wounded.

This was not the only battle fought by the Australians during Vietnam war. It was like so many conflicts the ADF has been involved in, those who defend our way of life and values show great courage, commitment, dedication, integrity and pride in serving us.

As a nation we have grown from the service of those who have served on our behalf, they have ensured that our quality of life is not impacted by the trials and horrors of war. They have mainly kept us free, free to speak, free to travel, free for good education, free to enjoy all that this wonderful country has to offer.

​POEM
We will now hear a poem called “A Brown Slouch Hat” written by J. Albert and Son of Sydney in 1942.

​LAYING OF WREATHS
We will now begin the laying of wreaths. During the wreath laying collection tins will be passed around by members of the Creswick Football Netball Club if you wish to make a donation. 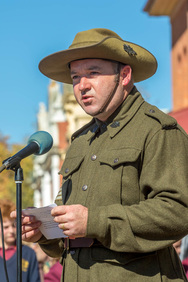 ​THE ACT OF REMEMBERANCE:
Read by Mr Michael Alsop, President of the Creswick Football Netball Club

On the morning of 25th April, 1915, Australian and New Zealand troops landed under fire at Gallipoli, and it was then and in the violent campaign which followed, that the ANZAC tradition was forged. The elements of that tradition have inspired and offered an enduring example to later generations of Australians.

On this day, above all days, we remember all those, whether service personnel or civilians, of every nation, who have suffered or continue to suffer because of war. In particular, we remember those who served in the Australian Defence Forces on land, sea and in the air, from the Boer War through two World Wars, Korea and Vietnam, to Rwanda, East Timor, the Solomon Islands, Iraq and Afghanistan.
So we pay homage not only to those original Anzac’s, but to all who died or were disabled in their service to their country. They enrich our nation’s history. Their hope was for the freedom of mankind and we remember with pride their courage, their compassion and their comradeship. 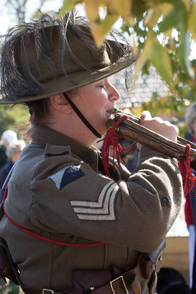 ​SILENT TRIBUTE AND ODE
Ladies and Gentlemen, please be upstanding for the silent tribute and ode.

“They shall grow not old as we that are left grow old,
Age shall not weary them nor the years condemn.
At the going down of the sun, and in the morning
We will remember them.”

Lest we forget – Rick Palm

ROUSE  (Susie Koene – Bugler)
Flag to be raised slowly at start; lowered slowly to half mast when finished 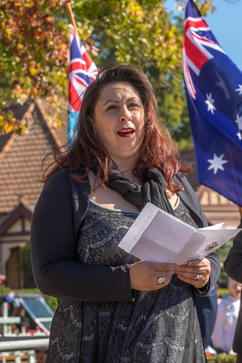 ​NATIONAL ANTHEMS
Please remain standing for the singing of the New Zealand and Australian National Anthems. Sung By Guiliana D’Appio. 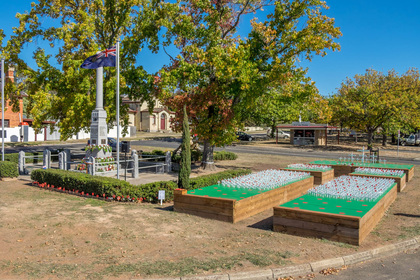 END OF SERVICE
Ladies and gentleman, boys and girls that concludes our service today but before going;
On behalf of our RSL I thank all the organisations and the many individuals who have so willingly given of their time to make sure this special day’s commemorative activities are a fitting tribute to those who have served and those who have given their lives for this country and for our community.

A special thanks  and congratulations goes to Mr Phil Greenbank who has dedicated so much time and effort in creating and preparing our new Field of Crosses, to those who have maintained this Cenotaph throughout the year and to all those who have contributed to making the wreaths that we will shortly be laying as we pay our tribute.

I apologise if I have missed anyone. 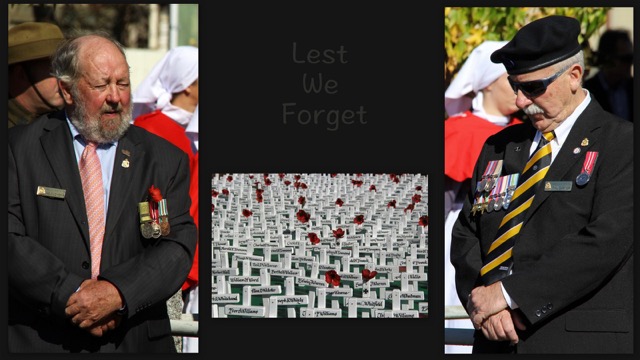 ​ANNOUNCEMENTS
•    Creswick Museum is holding an exhibit “Mud and Rats” focusing on the people that served in Europe and recognises the
75th Anniversary of Tobruk.
•    From 12.00 BBQ and Two Up at the American Hotel.
•    2.00 – Creswick Brass Band – Salute to the Anzacs Concert  at the Creswick Town Hall.
•    10 copies still available of the Creswick 1915 DVD – See Phil Carter.