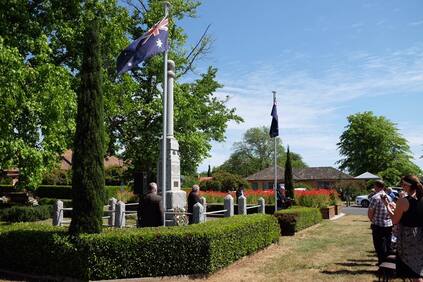 On behalf of the Creswick- Smeaton RSL Sub Branch I welcome you to this 99th anniversary commemoration of the armistice, which ended the First World War. 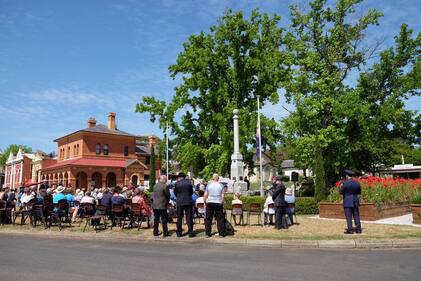 ​World War I began in 1914  and lasted for four years.  More than 60000 Australians were killed, 156000 wounded, gassed or taken prisoner and many more suffered for the rest of their lives.

At 5am on 11 November 1918, the German government representatives accepted the Armistice terms presented to them by the allies.

The armistice became effective at 11am the same day, and as the guns fell silent on the Western Front in France and Belgium, four years of hostilities ended.

In Australia and the other allied countries, 11th November became known as Armistice Day, a day to remember those who died in World War 1.

After World War II the Australian Government agreed to the United Kingdom's proposal that Armistice Day be renamed Remembrance Day to commemorate those who were killed in both World Wars.

Today the loss of all lives from all wars and conflicts is commemorated on Remembrance Day in Australia and the other commonwealth countries.
As a mark of respect to those who have died and suffered, we will be observing one minute’s silence at 1100 to reflect on the loss and suffering caused by war.

Fredrick Charles Clifton was born in 1890 in Talbot and was working as a metal ceiling fitter when he enlisted on the 17 August 1914 with Service Number 780, rank of Private with the 6th Battalion AIF
He shipped out to Gallipoli on HMAT ‘Hororata” on 19 October and was part of the landing on 25 April 1915.
By 8 May he was listed as missing in action, and it was assumed after testimony by one of his mates that he was possibly a prisoner. As it turned out he did survive, having received wounds to the left side of his body and left leg, and he was transferred to  Imtarpa hospital Malta on 7 July 1915.
On the 24 July he transferred to Ricasole Hospital and re-joined his unit on the 31July.
Two weeks later on 8 August after the Lone Pine battle he went missing again, but this time he was never seen again. A court of enquiry was held and in April 1916 it was found that Fred had been KIA on the Gallipoli Peninsula and was probably buried close to where he fell.
Lance Corporal Frederick Charles Clifton was just 25 when he  died, his name is on our cenotaph here and his name is also on the Lone Pine Memorial in Gallipoli.
In 1921 his widowed mother Catherine, received the Kings Message and Memorial Scroll, Memorial Plaque, and the Victory Medal, British Star and British War Medal

Many of you here are at the same age when many more Australians volunteered and never got to live their lives as you all do now. You should never forget their sacrifices.

I'd now like to introduce some of our local school children who will be reading a selection of poems , starting with from

Newlyn Primary School  --  For the Fallen  - Felicity and Laurelai 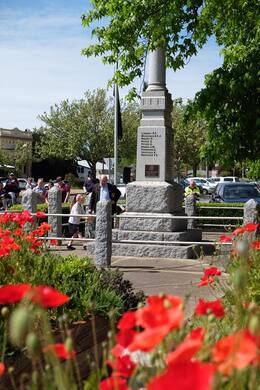 ​Would all who wish ta lay a wreath please come forward; 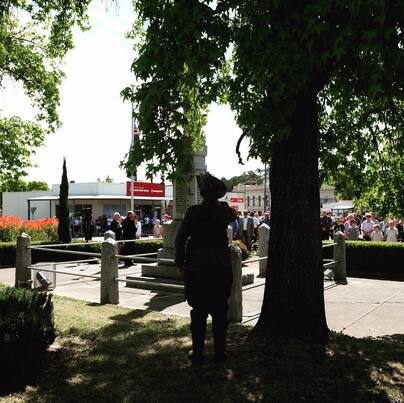 If you are able, could you please be upstanding

Beneath our radiant Southern Cross
We'll toil with hearts and hands;
To make this Commonwealth of ours
Renowned of all the lands;
For those who've come across the seas
We've boundless plains to share;
With courage let us all combine
To Advance Australia Fair.
In joyful strains then let us sing,
Advance Australia Fair.
Photos courtesy: Terry Hope