​A joint organising group of local clubs are again putting together a program for the Annual Australia Day Breakfast at Park Lake. The format will be similar to that of previous years. The volunteer group is comprised of members of: Creswick & District Historical Society, Creswick Lions Club, Creswick-Smeaton R.S.L, Creswick Football/Netball Club, Creswick Scouts and Venturers, and Mount Prospect Tennis Club

CRESWICK ACHIEVERS FOR 2017.
​ The organisers would again like to acknowledge Achievers in Creswick and District. There are many talented people in our community so if you know of an individual or group worthy of recognition as a Creswick Achiever for 2017 please email their contact details and a brief outline of their achievement to tacey55@gmail.com. 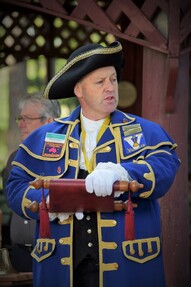 Philip Greenbank  -  Hepburn Shire Town Crier
Oyez Oyez Oyez
I would like to acknowledge that we are meeting on Jaara people country, and        pay my respects to the Dja Dja Wurrung community and their elders both past and present and emerging.

This is a time when people from all cultures and lands come together to celebrate on Australia Day.

The following is the Australia Day Commitment;

I would now like to introduce our Master of Ceremonies for today's event, Mr Alan Morris, President Creswick-Smeaton RSL

Ladies and Gentlemen, Boys and Girls
Welcome to this 2018 Australia Day Breakfast

Today we celebrate the anniversary  when on 26th January 1788, Captain Arthur Philip arrived with the first fleet of 11 convict ships and  raised the Union Jack at Sydney Cove to signal the beginning of the new colony of New South Wales.
In 1818 Governor Macquarie acknowledged the day officially as a public holiday. The previous year he accepted the recommendation of Captain Matthew Flinders, that the colony be called Australia.
In 1901, the Australian colonies federated to form the Commonwealth of Australia.
In 1935,  all the Australian states and territories used the name ‘Australia Day’ to mark the date of 26th January.
In 1994, they begin to celebrate Australia Day consistently as a public holiday.

Ladies and Gentlemen could you please be upstanding while we march out and hoist our national flag. This will be followed with our national anthem.
The Creswick Scouts and Ventures Group will now march out our Australian National Flag.

For her Australia Day address, the State Member for Ripon, Ms Louise Staley

We would now like to introduce our local achievers.

Creswick Scout Group Awards
The following Cubs and Venturer are this years Creswick Scout Group Young Achievers:
Jamie Doodt, Kaitlyn Lee and Oscar Hines have achieved their Grey Wolf, this is the highest award that a Cub Scout can achieve in their Scouting time.
Rowan Meehan achieved his Queen Scout Award and was presented to the Governor of Victoria on the 28th of October at Government House Melbourne at a formal presentation.

Creswick Brass Band
The Band had a very successful trip to the Mt Gambier competition, winning the D Grade section overall, and winning the best Stage March in D Grade. The Band came second in the Street March, and won the award of Band of the Year.

Graeme Mitchell
Graeme retired recently from the board of the Community Bank after being a founding chairman and director. He has helped the community at large over the years and we would like to take this opportunity to thank him and to wish him all the best for the future.

Laurie and Dot Porter
Thank you for providing Xmas lights and providing enjoyment to local children.

Xmas in Creswick Committee
Thank you to the Jan and the committee for taking the initiative to dress up the town for Xmas.

Val Lawrence
Has been awarded the John Pascoe Faulkner gold medal for services to horticulture, both here & at Box Hill.

Thank you to our supporters -
Hepburn Shire for providing the money and assistance with setting up.
Greenvale  Meats , for their sausages and bacon.
Creswick Foodworks for all their help with provisions.
and Creswick Bakery.

Would you all please enjoy your breakfast and please put all rubbish into the provided rubbish bins.
Thank you. 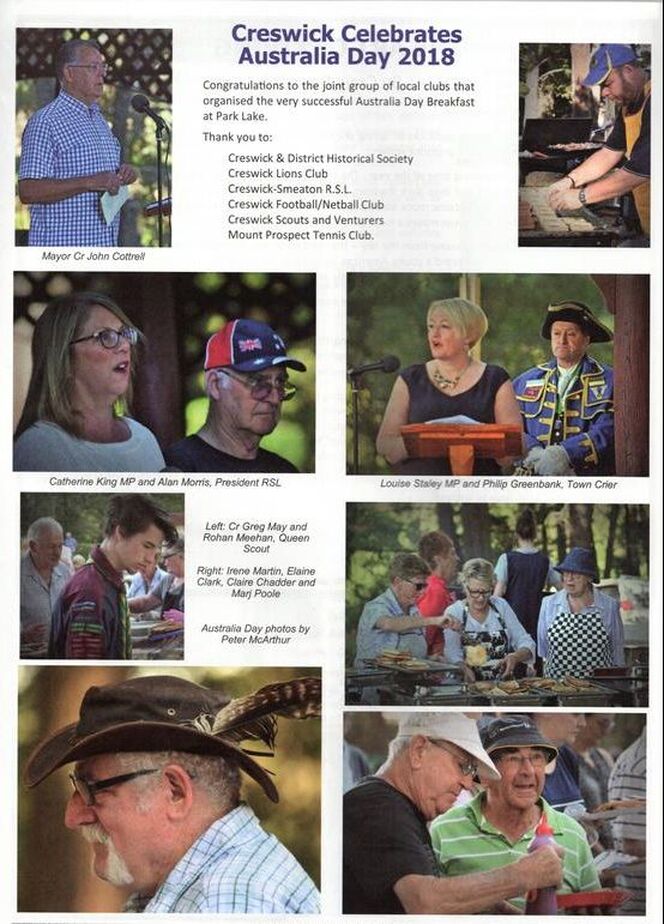