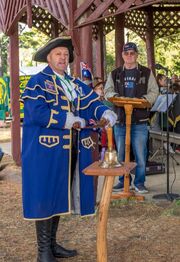 ​I would like to acknowledge that we are meeting on Jaara people country and pay my respects to the Dja Dja Wurrung community and their elders both past and present.

In 1768, Captain Cook set out on his first world tour. The primary reason, as an astronomer, was to record the Transit of Venus on the 3rd June 1769. His next target after visiting New Zealand was to find Van Diemen’s land. But strong prevailing northerly winds took him off course and instead came across the southern eastern coast of what was named New South Wales and landed on the 29 April 1770, almost 11 months after leaving Tahiti. Along with the traditional inhabitants, British soldiers and convicts started to arrive in the colony and in the late 1940’s migrants came to build the Snowy Mountain Scheme

Today migrants from around the world have come to this great land to call Australia home and we are now one of the largest multi-cultural countries in the world.

The following is the Australia Day Commitment;

I would now like to introduce our Master of Ceremonies for today's event, Mr Alan Morris, President - Creswick-Smeaton RSL

Australia Day is about acknowledging and celebrating the contribution that every Australian makes to our nation. From our Aboriginal and Torres Strait Islander people  - who have been here for more than 65,000 years - to those who have lived here for generations, and to those who have come from all corners of the globe to call our country home.

Ladies and Gentlemen could you please be upstanding while we march out and hoist our national flag. This will be followed with our national anthem.
The Creswick Scouts and Ventures Group will now march out our Australian National Flag.
Flag Raising Ceremony  -----   National Anthem

Individual Achievers
Casey Neil - Creswick District Motorcycle Club Champ 2018   (Aged 7)
Neville Cartledge - OAM was awarded a 65 Year Service to Scouting honour
Warren Cartledge - an apprentice motor mechanic was selected to compete at the WorkSkills National Championships
Aaron Sedgewick  -who was the Master Builders Ballarat Section Nominee for Apprentice of the Year
Bella Davies - was awarded the Jarred Tallent Young Achievers Award for her role as Creswick Primary School Captain, successes in Mt Prospect Tennis Association Under 12 and 13 sections, her achievements in winning numerous events at the Goldfields School Sports and also achievements in Under 13 football.
Zoe Hives - for achievement in reaching the second round of the Australian Open Tennis
Creswick Bowls Clubs' Men's Indoor team - who won their fourth consecutive A Grade Premiership
Congratulations to Claire Hepper and Alison O’Neil – for their work setting up Shannon’s Bridge

Also I would like to  acknowledge and thank all our local  CFA  units  for the extra voluntary effort they put in to keep our community protected.

Thank you to our supporters -
Hepburn Shire for providing the money and assistance with setting up.
Greenvale  Meats , for their sausages and bacon.
Creswick IGA for all their help with provisions.
and Creswick Bakery.

Would you all please enjoy your breakfast and please put all rubbish into the provided rubbish bins.
Thank you
​On behalf of the organizing group, thank you to everyone who contributed to the running of the 2019 Australia Day Breakfast at Park Lake, and thanks to everyone who came along and enjoyed a social breakfast.

Acknowledgement also goes to the Mount Prospect Tennis Association for allowing the use of their facility, to Bridgette O’Brien, Hepburn Shire Events officer, for her assistance in organizing the event, and to the suppliers of the food for the day: Creswick IGA, Creswick Country Bakery and Greenvale Meats.

The event was funded by a grant from the Hepburn Shire. Events such as this don’t just happen - they rely on volunteers to organize and run. Please consider helping out. We need new blood and new ideas; your feedback and suggestions are most welcome.