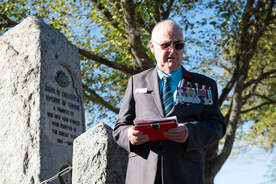 ​Introduced by Cr. Greg May, young Kingston local Ailish Murphy, spoke about her relative who are commemorated in the Avenue.

Thank you Cr May, and good morning everyone. today I would like to read to you the words of Tom Kettle  just 4 days before he was killed in 1916.
To My Daughter Bertty:
The Gift of God

In wise days my darling rosebud, blown
To beauty proud as was your mother's prime,
In that desired, delayed, incredible time,
You'll ask why I abandoned you, my own,
And the dear heart that was your baby throne,
To dice with death. And oh! they'll give you rhyme.
And reason: some will call the thing sublime.
And some decry it in a knowing tone.
So here, while mad guns curse overhead,
And tired men sign with mud for couch and floor,
Know that we fools, now the foolish dead,
Died nor for flag, nor King , nor Emperor, ----
But for a dream born in a herdman's shed,
And for the secret scripture of the poor. 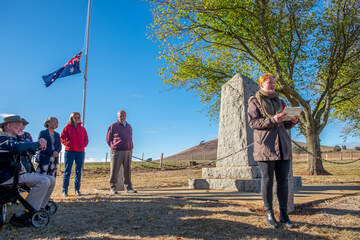 These words ring in my head today, for I am the great grand-daughter of John Murphy; a name that graces one of the nearly three-hundred trees that surround us now and I would love to share with your the story of his and his brother James.

In about 1870 a man name Pat Murphy left his home in County Clare in Ireland to emigrate to a new one her in Australia. Pat married a woman named jane Slade and together they live in a house on Smokey town road, Springmount, not far from what is now the CAFS Farm. There Pat reared pigs and made poteen whiskey form springmount Spuds, they weren't exactly squatocaracy.

Pat and Jane had seven children and in 1915 two of those children: John and James came home with the news that they were joining The Australian Imperial Forces. This news, however was not received with pride. Pat was an Irish Catholic, working class man and thought of his sons fighting England's was was quite a haunting one. He even swore not to forgive them if they did.

John and James were not swayed though, and in the AIF, as part to the 29th Battalion, they shipped off to Egypt, then found themselves of the the battlefields of Northern France and Belgium including the fiery furnace of Fromelle and the bleak winter of Flanders fields.

In the war's final year, a brutal period of time, the 29th Battalion had been decimated and, as such, was combined with the 32nd. It was also in this year the the Murphy's made what was probably quite a good career choice for a World War One soldier, and trained to become cooks for the Battalion.

That year they both came home to these hills.

John lived out the life of a good hardworking man. He went to church every Sunday morning and spent this Sunday afternoon fixing the boots of Springmount folk in his blacksmith's shed. He and his wife Alice had six children, one of whom was my beloved Grandfather"Big Jack".

His brother James didn't experience the same fortune. the horrific effects of gas attacks during the war were what brought about his end in 1936 when his lungs gave out at the Caulfield Repat Hospital.

Two parts of this story hit me particularly hard. The first is the postcards that hang on the walls in my home whose worlds ask of family and home and tell of the boys from home who they crossed paths with on the other side of the world. To think of these words written over 100 years ago about community and look out today at  mine gathered amongst these peaceful rees as we gather to remember, fills me with joy.

And secondly; the story of Pat , a father who felt betrayed by his boys, who never saw them again. Pat died six months before the war came to a close. His memory makes me hope. It makes me hope that in the end he forgave them and that one day we will wake up in a world where his story is not familiar.

I think Pat did forgive them, and that it is with peace the he lies resting in his unmarked grave at Creswick Cemetery because his boys weren't really fighting for the English Monarch that Pat felt no loyalty to, but for "a dream born in a herdsman's shed, and for the secret scripture of the poor".
Wreath Laying - Julie Baulch 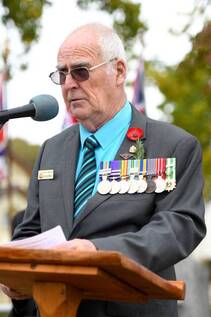 We meet here today, not to glorify war or praise victors, but to remember those who have served our country during times of conflict and crisis, and to reflect upon their selfless sacrifice.
To all Australians, ANZAC day is a tradition, paid for in blood and celebrated in our freedom. It is a day in which not only do we salute the ANZACs, but in paying tribute to them, we also take the opportunity to invigorate our national spirit and pride.

On this day, in 1915, a group of volunteer Australian and New Zealand soldiers found themselves wading ashore before dawn at a small beach on the Gallipoli peninsula in Turkey. Many of these men were only teenagers, some as young as 16. All were anxious to prove their courage and national identity.
Over the eight months following the landing, those young ANZACs underwent a ‘trial by ordeal’. In total 36,000 Australian and New Zealand soldiers were killed or wounded at Gallipoli. But in those terrible battles, young Australians earned a reputation for courage, self-reliance and mateship.

We pause today to acknowledge all current and former members of our defence forces – the brave men and women who represent our country on a daily basis. We have seen our personnel serve in Australia and overseas carrying on the spirit of ANZAC. We must not forget today’s veterans’, the  young men and women who are returning from duty in places like Afghanistan.

ANZAC Day is a day to remember all men and women of the Australian Defence Force, regardless of the time they served. On ANZAC Day we pay tribute to all current and former members of the Australian Defence Force, those lost in training, on operations, the wounded, injured and ill. The ANZAC spirit forged at Gallipoli will never be forgotten. This is why Australians come together every ANZAC day. We do it to remember the ANZACs and their achievements; and we should remember them not as old soldiers from a distant war, but as the young Australians they were in 1915.

Our vast country with its harsh beauty and open skies, helps to shape healthy, confident, competitive,  and freedom loving individuals, who with good leadership and high motivation, can more than match the best in the world; in whatever they do. The ANZACs showed us these same qualities.
We have the ability to face challenges together and overcome them, to put community before self, to be courageous, determined, self-reliant and strong. We should be proud of our heritage. This is the spirit of ANZAC; the spirit that we must pass to the next generations. 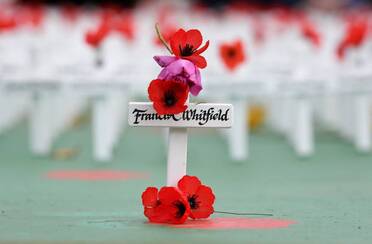 As is our custom today we honour another of our local heroes.
Francis Craymore Whitfield was born in Creswick and working as a law clerk when at the age of 29 he enlisted at Ballarat on 26th July 1915. Francis joined the 8th Battalion on 24 Feb 1916 at Zeitoun in Egypt.
He was promoted to temporary corporal on 29th Feb and embarked on HMT Megantic on 26th March 1916, and disembarked at Marseilles on 31st March.
On 5th May he was promoted to corporal and then promoted to sergeant on 18th August.
4 days later Sergeant Whitfield was wounded in the head on 22nd August and was transferred to the 44th Casualty Clearing Station where on the 26th August he died of his wounds.
He is buried in the British Cemetery, Plot 2, Row E, Grave 62 at Puchervilles which is 7.5 miles southeast of  Boullens in France.
Sgt Whitfield was awarded the 1914-15 Star, British War Medal and the Victory Medal
Francis had declared that his father was his Next of Kin (NOK) on his enlistment papers and his wife, Caroline had to go to great lengths to prove that she was in fact his NOK. The Base records office in Melbourne received a letter from Sir Alexander Peacock who was Premier at the time  on behalf of Caroline. It was eventually sorted out after Caroline produced their wedding certificate and the records were set straight. Caroline Whitfield received a memorial plaque, scroll and his medals in 1922.
There is a medallion that was presented by the citizens of Creswick on display in the RSL Hall. 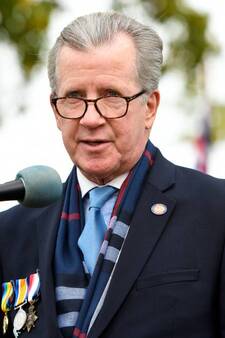 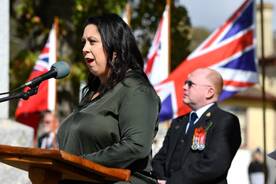 Abide with me, fast falls the eventide;
The darkness deepens;
Lord with me abide’
When other helpers fail and comfort flee,
Help of the helpless,
O abide with me.

I need thy presence every passing hour.
What for the grace can foil the tempter’s power
Who, like thyself, my guide and stay can be,
Through cloud and sunshine;
​Lord abide with me. 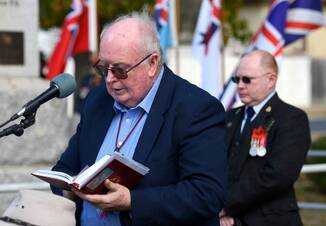 ​Prayer  - Father Colin Griffiths,  Anglican Church
Defence International Training Centre and 100 International Guests.
Our International guest are from all three services, who are currently competing courses at the International Training  Centre at Laverton, they certainly added colour to the occasion. They were very impressive in their immaculate uniforms of different styles and colour from sixteen countries from the Middle Eastern, South East Asian and South West Pacific regions. 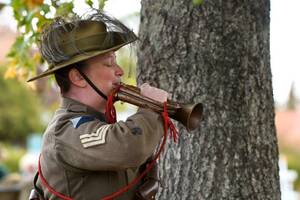 ​Thank you for your attendance today. 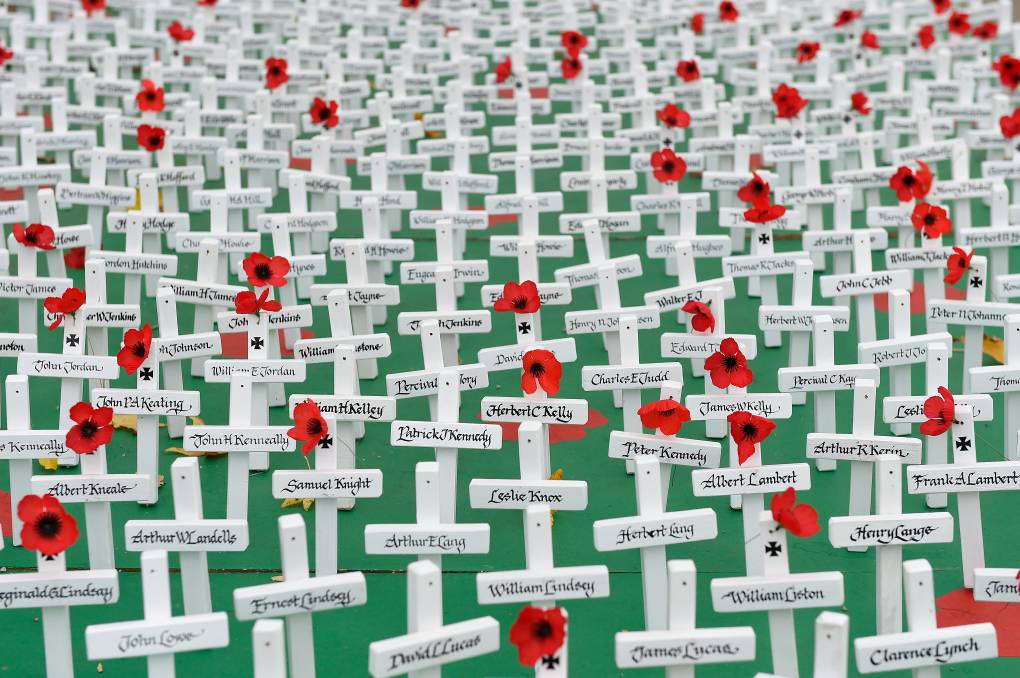