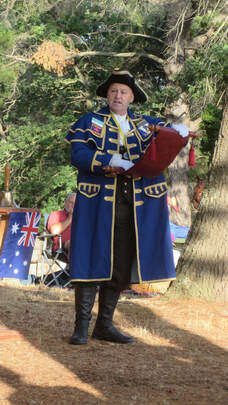 ​I would like to acknowledge that we are meeting on Jaara people country and pay my respects to the  Dja Dja Wurrung community and their elders both past and present.

Australia Day - a day where all Australians,  come together to celebrate the great diversity of this country and of the people that make it up.

Those who have come from another country, either willingly or force out by war, who now live in this country and add their culture to ours – we welcome you, as you call Australia home.

This is a country where mateship takes a step forward in times of need and when a helping hand is not far away, and this is never more prevalent than now, with Australia in one of the most unprecedented natural disasters in her history, with major fires burning in every state and territory.

Our thoughts go out to whose have been impacted by the fires, to the thousands who have been displaced, and especially in NSW, SA and Victoria,  where 2 thousand 1 hundred families have lost their homes and the 26 who have already lost their lives.

I ask that you continue to support the emergency services, who are overwhelmed by this disaster, and, whose resources are stretched, not only defending their own state but with assisting their neighbouring states such as the 1000 CFA firefighters,  who were helping their colleges in NSW when the Gippsland fires broke out and were called back home, and, we remember the 7 firefighters from Australia and the United States who have given theirs lives in these fires, to help protect other communities and strangers, as mates do.

So enjoy this day, as we Australians know how to do, but keep a thought for those who won’t have this opportunity today.

I would now like to introduce our Master of Ceremonies for today's event, Mr Alan Morris, President Creswick-Smeaton RSL 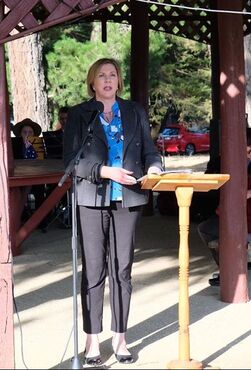 Catherine King MP
Before we start I would like to let you know that today is our Town Criers Birthday. Please join in with the Band for Happy Birthday.

‘I would like to acknowledge that this meeting is being held on the traditional lands of the Jaara people, and pay my respect to elders of the Dja Dja Wurrung community both past and present.’

Today we celebrate the anniversary when on 26th January 1788, Captain Arthur Philip arrived with the first fleet of 11 convict ships and  raised the Union Jack at Sydney Cove to signal the beginning of the new colony of New South Wales.
This day was known as Foundation Day and was proclaimed as a public holiday by Governor Macquarie in 1818. He also accepted a recommendation by Captain Matthew Flinders that the colony be called Australia, taken from the Latin word Australis which translated as southern land.

Ladies and Gentlemen could you please be upstanding while we march out and hoist our national flag. This will be followed with our national anthem.

For those who wish to please remain standing to recite the Australian Affirmation which is printed on the back of your programs.

As an Australian Citizen
I affirm my loyalty to Australia and its people
Whose democratic beliefs I share
Whose rights and liberties I respect, and
Whose laws I uphold and obey. 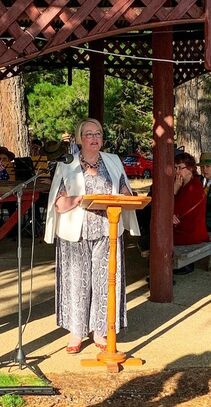 Louise Staley MP
For the 2019 Achievers, I would ask Ms Louise Staley to come forth and read out our achievers

Milestone
Jennie Boyd  has served 7 years as a scout leader in Creswick and stepped down from her role at the end of 2019. Thankyou Jennie.

Creswick Brass Band ​
Local Emergency Services
A big thank you to our volunteers from Creswick Historical Society, Creswick Lions Club, Creswick Football and Netball Club, Creswick CFA, Creswick-Smeaton RSL, Creswick walkers group, Creswick Scouts and Venturers, and Mount Prospect Tennis club, we could not have done this without your help.
This breakfast relies heavily on our volunteers and new volunteers are always welcome.

Thank you to our supporters -
Hepburn Shire . .
Creswick IGA
and Creswick Country Bakery.

Would you all please enjoy your breakfast and please put all rubbish into the provided rubbish bins. ​
Thank you to all who attended the Creswick Australia Day Breakfast. Numbers were down this year, being a Sunday in the middle of a long weekend. Next year's event will be mid-week so hopefully crowds will return to the big numbers of previous years.

Events such as this do not just happen. A number of people help organise and run the day. These include members of the Creswick Lions Club, Creswick & District Historical Society, Creswick-Smeaton RSL, Creswick Garden Club, Creswick Walkers, Creswick Scouts and Creswick Football Netball Club as well as those who offered their help on the day. All played a significant role in running the day, thank you to all involved and to Bridgerre o'Brien from the Hepburn Shire for her assistance.

Thanks fo to Catherine King MP (Australia Day address), Louise Staley MP (Ripon) (Recognition of Local Achievers), Cr Don Henderson (representing the Mayor), Cr Greg May and Hepburn Shire CEO Evan King. The event was again funded by the Hepburn Shire and local businesses (Creswick IGA and Creswick Bakery) who supplied the food for the breakfast. Thank you to the Mt Prospect Tennis Club for the use of their facilities and to the CDN for promoting the breakfast so prominently.

The Creswick Brass Band again demonstrated their prowess playing a number of tunes and local resident, Tim Drylie, for an excellent rendition of the National Anthem. Thank you to Katrina and the band and Tim for being part of the ceremony along with Town Crier; Philip Greenbank for calling those assembled to order for the official ceremony.

Pat Tacey for the Australia Day Organising group and CDN.