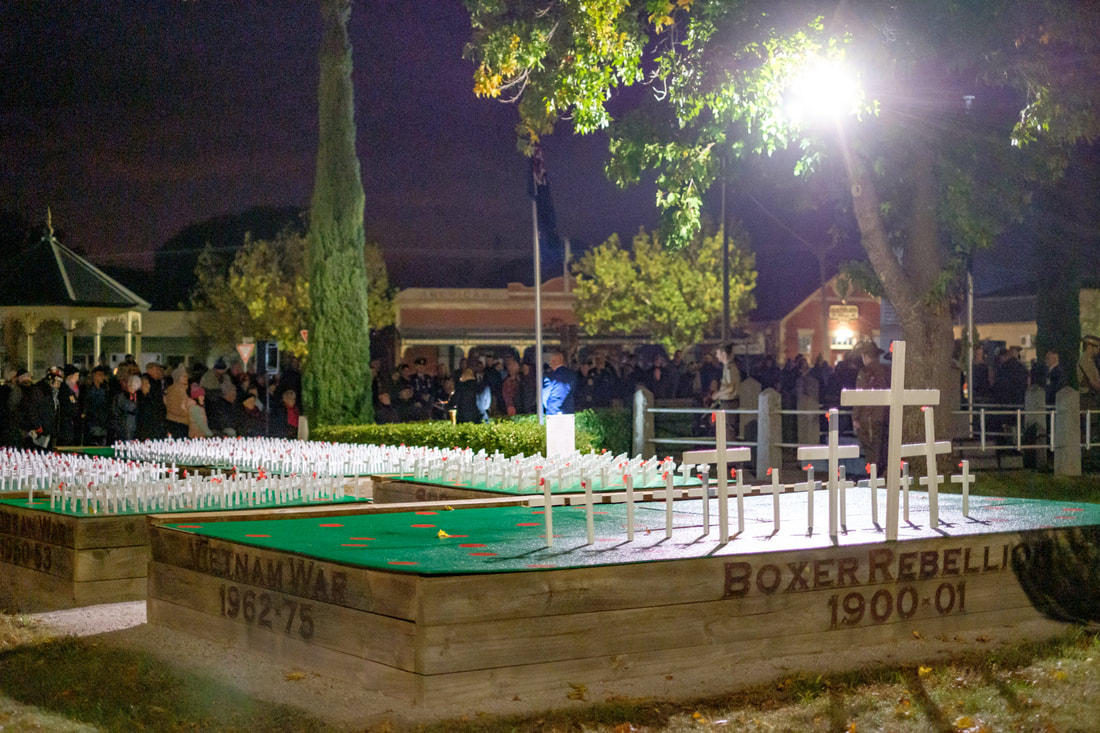 "Reveille at 4am. Most of us spent a restless night. Breakfast was at 4:40am and warships opened up a bombardment and Turks replying from batteries ashore. We can see shrapnel shell bursting high inn air over our ships."

​"...Then a destroyer came alongside us after landing the 3rd Bde. We boarded her and she steamed for shore. We could see the broken, scrub covered hills in front of us. Shrapnel overhead accounted for the few of us. The destroyer stopped and we transhipped into boats manned by blue jackets in charge of boys...Steam pinnaces towed a dozen boats to the shore..."

"...The water all round our boats was whipped up by shrapnel fire. Some boats were half full of wounded. Our boat grounded some distance from the beach. We waited a few seconds until our boat was hit by shrapnel then Col Gartside told us to hop out. We needed no second order. I was in the storm. I hopped over the side into 4 ft of water and made for the beach. We crossed a narrow strip of sand to the prickly holly covered hills in front of us and began our climb. You could hear the commands D Coy here, 14 PI here or 1 sect 14 PI here and so on. By the time the Coy was on top of the first ridge we were in our places. That ridge was swept with shellfire and in a few minutes dead and dying were all around us. We scrambled own the other side of the ridge into a gully also swept by shellfire. We stormed up and over another ridge passing dead and wounded until we came under machine gun fire."

"...I was lying behind a bush when a machine gun got busy and was cutting the twigs over my head and next I got a graze through the right arm. Another bullet smashed into the woodwork of my rifle. We could not see anything to aim at. We then made another rush and saw a Turkish trench and machine gun a few yards from us. We charged into and over the trench. The Turks did not wait but we shot them down getting away. We dropped into the trench and used their Maxim gun. I had a go at my water botte and found it a bit light and found a hole shot through it..."

"...There were several wounded men in the vicinity. We got as many as we could into the shelter of the trench. They were crying out for water and we had very little. We crawled out of the trench again and got the bottles from the Turks. We were in an advanced position and could see men on either flank falling back. We could see men falling back wounded and could see them drop again wounded once more. We hung onto our trench until late in the afternoon when some New Zealanders reached us..." 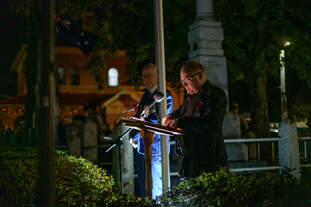 ANZAC Cove
​
There's a lonely stretch of hillocks:
There's a beach asleep and drear:
There's a battered broken fort beside the sea.
There are sunken trample graves:
And a little rotting pier:
And winding paths that wind unceasingly.
There's a torn and silent valley:
There's a tiny rivulet.
With some blood upon the stones beside its mouth.
There are lines of buried bones:
There's an unpaid waiting debt:
There's a sound of gentle sobbing in the 'south

Good morning everyone. It is always heartening to see the numbers of people, especially our younger generations, gathered this morning. I know that the every-declining ranks of our veterans value your attendance. To paraphrase Gen Sir Peter Cosgrove: "ANZAC is now not the sole possession of the veterans, probably never has been. It's not the possession of the armed forces or the RSL, although they are, to some degree, custodians of ANZAC Day. It is where it ought to be and probably has been spiritually for generations, the possession of the peoples of Australia and New Zealand.

When war broke out in 1914 Australia has been a federated nation for only 13 years, New Zealand for seven, and both government were eager to establish a reputation among the nations of the world. The first action of both nation's soldiers on 25 April 1915 had such a profound effect, along with those who served and are still serving, beginning with that original landing at the dawn on the Gallipoli Peninsula.

We remember all those that served or paid the ultimate sacrifice in World Wat Two, Korea, Indonesia, Malaya, Vietnam, Cambodia, Somalia, East Timor, Iraq and Afghanistan as well as other contributions to peace keeping and peace-making missions throughout the world.

We reflect upon the epitaphs engraved on memorials to the fallen of a distant battlefield, which read, "...for your tomorrow, we gave our today...", or "...from the uttermost ends of the earth...".

This then is why we gather together in this place, at this hour, on this day every year; not to glorify war or praise victors, but to commemorate those who have served our nation in times of conflict and crisis; to reflect upon their sacrifice, and to remember those who suffered and are still suffering in body, mind and spirit.
ACT OF REMBERANCE

I now invite the Honourable Catherin King MP to lay a wreath.

The ODE:
They shall grow not old as we who are left grow old,
Age shall not weary them, nor the years condemn.
At the going down of the sun, and in the morning,
We will remember them. 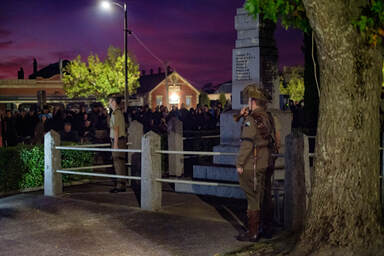 Ladies and gentlemen, that concludes our Dawn Service for this morning.
Thankyou to the members of  8 / 7th Royal Victoria Regiment, who comprised the catafalque party this morning.

There will be a Gunfire Breakfast at the Senior Citizens Centre should you wish to participate.

To my left is the Field of Crosses commemorating those of the area who had at some time served and died. Those who died since ANZAC Day last year are at the top of the Field. There are poppies available to be placed should you wish to locate someone within this field.

There will be a service this morning at 10:45 following the march. I would encourage you to attend.
Gunfire Breakfast
Due to restoration works to begin on the Town Hall, the traditional Gunfire Breakfast was moved to the Senior Citizens Centre.

Thanks to Eddie and his team, who kept the Gunfire Breakfast going in this time of COVID
Photos Courtesy: Terry Hope Productions