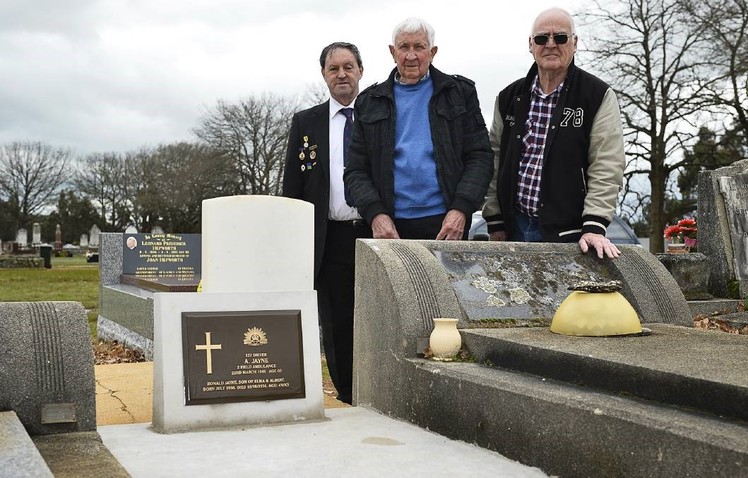 As a little boy, Len Jayne had no idea his brother and WWI veteran father were buried next to his Nanna.

His mother would walk him to Creswick Cemetery on Sundays visit his Nanna’s grave. But his mother rarely spoke about her late husband, Albert, or her little son Ronald, who had died at only four weeks of age.

Albert was born in Creswick in 1885 and was the 137th person to enlist in WWI, fighting in Gallipoli on two separate occasions from 1914 before being discharged with a shoulder injury a month before armistice in 1918.

Len’s mother told him his father had been gassed during the war. That might have been the cause of the illness that led to his death in 1945.

He was buried in an unmarked grave, nothing more than a patch of earth, in the same spot that Ronald had been buried in 1936. His wife and two young children weren’t able to afford any markings for his grave.

Now 79, Len is finally able to see his father properly laid to rest, thanks to an elegant grave just installed by the War Graves Commission.

Albert Jayne's son Len being interviewed by Ballarat Courier journalist Amber Wilson
​The project came about when Len’s nephew, Barry Paterson, started delving into his family’s history and started speaking with the Creswick Cemetery Trust, who helped him with the information he needed to make an application for a headstone and plaque.

Initially, his request was rejected until he spoke with the Creswick-Smeaton RSL, who contacted local politicians Catherine King and Louise Staley for help.

“It was a real shock to me,” the Miners Rest resident said of hearing his father would be given a headstone.
“He’s laid here all these years.”

He said his father had died when he was just seven years old, and didn’t remember him very well.
“My mother never spoke about the past,” he said.
“I didn’t know he was buried here.”

Philip Greenbank, of the Creswick-Smeaton RSL, said Albert was first appointed to the 2nd Australian Field Ambulance in 1914, when he was 29 years old.
“He went to the Gallipoli at the start of the war and he was shipped back home in 1918, a month before armistice was declared,” he said.
“So he was one of the rare few that served the entire war.”
Re-dedication Service for Private Albert Jayne
​
I would like to welcome family members of Albert Jayne, Catherine King Federal Member for Ballarat, Louise Staley State Member for Ripon, Creswick-Smeaton RSL members and members of the public.

Good afternoon, my name is Alan Morris, President of the Creswick-Smeaton RSL Sub-Branch

We are assembled here today to re dedicate this restored grave for Albert Jayne who served with us in war and has already gone to join the great army of those who fell in battle in defence of their nation.

Albert Jayne came through the ordeal of war. How well he served will be known to his Unit comrades, and how he served his fellow man on his return is known to his family and friends who are here with us today.

Albert Jayne was born in Creswick in October 1885, and worked as a labourer prior to enlisting in the Australian Imperial Forces on 19th August 1914 in Ballarat.
His service number was 137

He was appointed to the 2nd Australian Field Ambulance on 4th September 1914 and went to Gallipoli and then joined the Mediterranean Expeditionary Force on 1 May 1915.

His unit was evacuated on the 3 June and he was admitted to hospital on 5 August in Alexandra, Egypt and later transferred to No.3 Auxiliary Hospital in Cairo later being discharged to light duties.

On the 7 December he was temporary assigned to No. 3 Field Ambulance at ANZAC Base before being transferred to 7th Battalion at Gallipoli.

He was admitted to hospital on the 14 January 1916, later being discharged on 30 March to the Overseas Base at Ghezireh as hospital staff before embarking for London in June.

August saw him transferred to the Overseas Base in France reinforcing 1st Ambulance Division and later re-joining the 2nd Field Ambulance in September until 21 February 1917 when he joined the South Midland Casualty Clearing Station.

In August he was admitted to hospital with a shoulder injury then transferred to the New Zealand Hospital and later shipped back to Dartford England where he spent time in several hospitals for treatment.

After being discharged in December 1917, Albert was shipped back overseas to France to the 1st Ambulance Medical Corp then in January 1918 became a driver for the AIF until he was shipped out to Australia on 8 October 1918

Albert was discharged on the 31 January 1919

He worked for the Creswick Forest Nursery for many years after he returned from the war. Albert passed away on 22nd March 1945 after several years of illness.
He was buried in an unmarked grave with his infant son who passed away in 1936 aged 4 weeks.

His wife and 2 young children were unable to afford any markings for Alberts Grave.

Today, this grave is no longer unmarked

Why we are here today

Barry Paterson, Grandson to Albert Jayne started delving into his family history four years ago. As a lot of the family members were buried here at the Creswick Cemetery, over the past two years, Barry has been working with Wendy Olhsen, Secretary of the Cemetery Trust, in getting information about the family and had asked Wendy to get photos of the family headstones.

After getting these photos, Barry noticed that there was one of his grandmother’s headstone but realised there was none of Albert’s.

Thinking Albert was not buried here, again asked Wendy to check and it was confirmed that Albert was here, so asked for a photo of the headstone but was advised that there was none.

Barry remembered reading about the War Graves Commission who were putting plaques on graves to identify those who were WWI veterans.

He applied to DVA War Graves for assistance but his request was rejected.

In a chance contact with Marjorie Poole from the Creswick & District Historical Society who contacted Barry re getting a photo of Albert Jayne for a project that they were doing and in a discussion about the missing headstone, Barry was advised to contact the RSL for assistance.

Following an email from Barry, the RSL’s then Secretary Phil Carter worked with Barry and contacted Catherine King and Louise Staley asking for their support to resolve this matter.

Catherine King sent a letter of support to the Office of Australian War Graves and Louise Staley did the same to the Department of Veterans Affairs.
Through their support for this project, we are here today and we thank them for making this possible.

We again honour his comradeship, duty, courage and exemplary service for Australia in war.

As well; we remember with pride and admiration the high traditions of all those who served our nations and our earnest hope is that this dedication service today will continue to inspire us to follow those traditions so that we may be able to adequately serve our community and all of humanity.

Remembering his many qualities and the happy times we spent together – we join in a silent pledge – to sink all differences, one with the other – and extend the hand of comradeship to all in need as Albert Jayne would have us do.”

As brother follows brother into the great beyond – we who are left close our ranks to carry on the RSL tradition of unselfish service – to the disabled, to the bereaved and to maintain the highest ideals of citizenship.”

This grave with this cemetery, which I now dedicate, will hopefully instruct all who see it or visit it, about the cost of sacrifice, endeavours and the selfless contribution made by him whom we honour today.

I would now like to ask the family to lay their tribute to Albert Jayne.

With Poppy in hand:

“O Valiant Heart, who to your glory came
Through dust of conflict and through battle flame
Tranquil you lie, your knightly virtue proved,
Your memory hallowed in the land you loved.”
“They shall grow not old, as we that are left grow old:
Age shall not weary them, nor the years condemn.
At the going down of the sun and in the morning
We will remember them.”

“We will remember them.”

The service of the day is over, and the hour has come for rest.
This blood red poppy – the traditional emblem of sacrifice, the symbol of a life given for one’s country – links us with Albert Jayne.
It is a token of our affectionate and proud remembrance.
We place it here in abiding memory.”

Alan places his poppy on the Grave
I ask those who wish to, to please lay a poppy.

Please join with me, reverently, in a silent tribute to Albert Jayne

The silence is broken by;
“Lest we forget.”

This is followed by The Rouse also by Susie Koene

"This completes the service.” 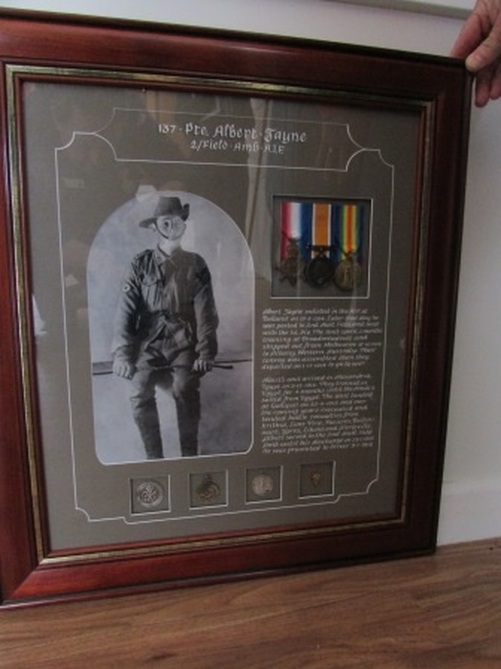