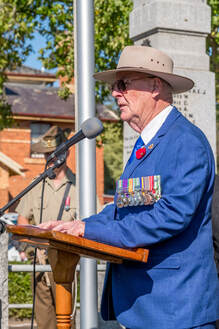 ​We stand here this morning on Dja Dja Wurrung land. We acknowledge the traditional owners and recognise their continuing connection to land, waters and culture. We pay respect to the Elders, past, present and emerging.

Distinguished Guests
Members of the Australian Defence Force and International visitors from the Defence International Training Centre.
Ladies and Gentlemen

​The landing at Gallipoli happened 107 years ago.
Before dawn on 25 April 1915, the first soldiers of the Australian and New Zealand Army Corps landed on the shores of the Gallipoli peninsula. The men were part of a British and French led invasion. The Allies' mission was to destroy Turkish guns that were preventing naval ships from reaching and bombarding the Turkish capital, Constantinople. If they succeeded, Turkey might be forced out of the war and Germany would lose an important ally. Some 2000 Australians were killed or wounded on 25 April. It was a day of confusion and fear. One soldier called it ‘a day of sorrow' as he remembered the dead and wounded.
At Anzac Cove, the Australians were the first to land. The New Zealanders followed later in the day. They advanced about a mile in some places, less in others, but they could go no further. For the next eight months, the campaign was a stalemate. In December, the Anzacs were evacuated. By then, about 8700 Australians and almost 2700 New Zealanders had been killed. They were some of at least 130,000 soldiers on both sides who lost their lives at Gallipoli.
Anzac Day has been one of the most important dates on Australia's calendar since 1916. At first, it gave people a chance to honour the original Anzacs – the Australians and New Zealanders who fought on Gallipoli. Then it became a day for those who had served in the First World War. With Australians experiencing the Second World War, and wars, conflicts and peacekeeping operations that have followed, Anzac Day has become an occasion to honour all who have worn our country's uniform in service. Today, we reflect on that service. We recognise more than a hundred thousand Australian service men and women who have lost their lives in military operations carried out in our country's name. We honour the values that have been invested in the original Anzacs – loyalty, selflessness, courage – and the ways in which later generations have measured their own achievements against those of the soldiers who fought on Gallipoli.
As is our tradition, we will now honour another WW1 veteran from this shire.
Private Edward James Albert GRAY Service No 7234A
Was born in Creswick on 31st December 1895. Edward was a farmer here in Creswick.
Edward enlisted at Melbourne on 2nd January 1917 in 24th Reinforcements, 7th Battalion.
He embarked at Melbourne on H.M.A.T. ‘Ballarat’, on 19th February 1917, and disembarked at Devonport, England, on 25th April.
His unit marched into Durrington (England) on 26th April.
The unit Sailed from Southampton for France on 19th March 1917 and taken on strength to 24th Reinforcements, 7th Battalion.
He marched into Rouelles on 26th March & out to his unit on 27th March.
Edward was wounded in action with a gunshot wound to head, in France, on 1st September 1918. He was admitted to hospital but died later that day. He was just 23 years old.


He is buried in Herbecourt Cemetery, 4 miles west of Peronne.
He was awarded the - British War Medal and Victory Medal​ 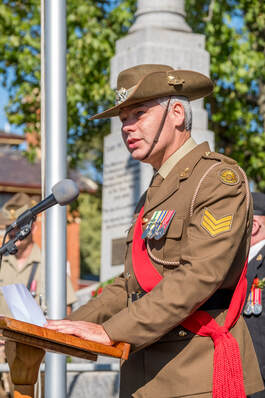 At around 4.30 am on 25th of April 1915, the first soldiers of the Australian and New Zealand Army Corp, the first ANZACs, landed in the Ari Burnu area on the Gallipoli Peninsula, Turkey. By the end of that first day, over 16,000 men had surged ashore, and more than 2,000 were dead or injured.

On 25 th of April 2000 I had the fortunate opportunity to attend the Dawn service at Gallipoli, first arriving in total darkness. In the first light of dawn the cliffs and hills emerged from the darkness, looming high above us. It dawned on me, the scale of the task that they faced on that fateful morning.

These men had not set out to be immortalised; but their conduct on that day, and in the subsequent months of hardships endured on the shores of Gallipoli, has set them apart in our nation’s consciousness. Australian’s are quite rightly proud of the Anzac tradition, proud of the service provided by our first ANZACs and the manner in which they conducted themselves. Their courage, initiative, loyalty and selflessness has come to symbolise the best of Australians.

Following World War One, many returned veterans would gather at Anzac Day parades around the country, to reflect among the comrades with whom they shared a special bond, and to remember the mates they had left behind.

The silencing of the guns in November 1918 may well have been rejoiced, but it was tempered by a grief that did not diminish with time for those who lost loved ones. As a nation, Australians also grieved for the loss of their young sons, and for the loss of the innocence of a newly established nation.

Almost half-a-million Australians enlisted in for service during World War One; over 60,000 Australians died and 156,000 were wounded or taken prisoner. But sadly the peace they had paid so much for would not last. And whilst Anzac Day commemorations began in 1916 as a way of honouring those who had died at Gallipoli the year before; and today we also recognise that Anzac Day has come to symbolise more than just the first Australian and New Zealand soldiers, who fought so valiantly at Gallipoli.

Anzac Day has come to symbolise all men and women who serve in Australia’s armed forces; all those who fight and make sacrifices for this country; all those who continue to uphold the Anzac values.

Through World War Two, Korea, Vietnam, Iraq, Afghanistan, UN Peace Keeping Missions and other military operations – the men and women of Australia’s Navy, Army and Air Force continue to serve Australia with pride, and remain true to the courage, dedication and loyalty demonstrated by the men of Gallipoli in 1915.

Today we meet to continue the practice established by our first ANZACs, to show our respect for the service of our veterans, to honour the sacrifice they made; and to demonstrate, in some small way, solidarity for the hardships they endured.

Each Anzac Day Service gives us an opportunity to pause and reflect on the sacrifice of those who have served, those who continue to serve, and those who will serve in the future.

There are over 100,000 names on the Australian War Memorial’s Roll of Honour in Canberra, keeping watch over the Memorial’s Pool of Reflection and Eternal Flame; 100,000 people who have made the ultimate sacrifice for our country.

This year however, the situation in the Ukraine has reminded me of the other casualties of war. On a day such as this, it is often overlooked the impact of twar has on the civilian populations that live inside the conflict zones. Be they a Turkish fisherman, a French farmer, a villager in Vietnam or Rwanda, tribespeople from North Africa or the Solomon Islands, a shopkeepers in Iraq and orphaned child in Korea. These are the forgotten victims of war and the terrible impact it has on all
of whom that it touches.

In the words of the Spanish philosopher George Santayana in the aftermath of the Spanish Civil War: “Those who forget the past are condemned to repeat it”

Lest we forget
Reading of poems by the Primary schools​ 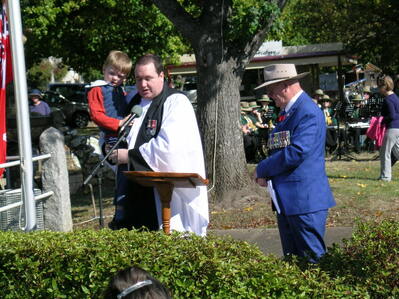 Eternal Father, strong to save,
Whose arm hath bound the restless wave,
Who bidd'st the mighty ocean deep,
Its own appointed limits keep.
Oh hear us when we cry to Thee,
For those in peril on the sea! Amen.

Eternal Father,
lend Thy grace To those with wings who fly thro' space,
Thro wind and storm, thro' sun and rain,
Oh bring them safely home again.
Oh Father, hear an humble prayer,
For those in peril in the air! Amen.

Oh Trinity of love and pow'r,
Our brethren shield in danger's hour,
From rock and tempest, fire and foe,
Protect them where so e'er they go.
Thus evermore shall rise to Thee
​ Glad hymns of praise from land and sea! Amen.
​
Laying of Wreaths - with music by the Creswick Brass Band 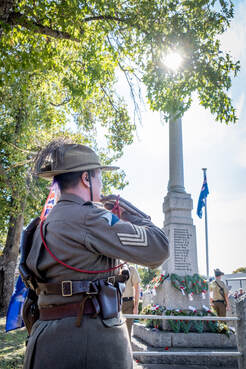 Inscribed on this Cenotaph are the names of those who paid the supreme sacrifice, and also on many other Cenotaphs throughout Australia and in Foreign Lands many other names are inscribed.
We gather here today, humble and contrite, and in respect for those gallant men and women.
Hallowed in Christ be the memory of the brave men and women who died in these wars for the freedom of the world. They were young, straight of limb, true of eye, they were staunch to the end against odds uncounted.
They fell with their faces to the foe.

New Zealand and Australian National Anthems
End of Service
Thankyou to all who helped setup, the ladies who made the wreaths, the Red Cross ladies for help in the RSL, the Creswick scouts for acting as our flag bearers, and the Creswick public for their generousity with our Anzac Appeal. ​