A Worldwide Day of Commemorative Events marking the Centenary of the end of the First World War and paying tribute to the millions killed or wounded in battle, and those on the home front who struggled amidst pain and loss to help ensure freedom survived.

06.00: Battle’s O’er
1000 individual Pipers across the United Kingdom and countries around the world commence the day’s commemorations with the traditional Scottish lament played at the end of battle – Battle’s O’er.

18.55: The Last Post
1000 individual Buglers sound this historic tribute at WW1 Beacons of Light locations across the Nation and UK Overseas Territories.

19.05: Ringing Out for Peace
1000 cathedrals and churches will ring out their bells across the nation, and beyond, in celebration of Peace. 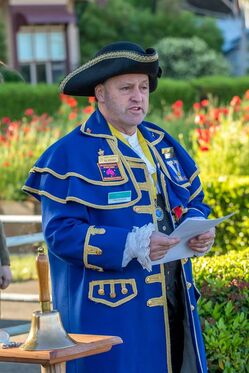 In Creswick, this was commemorated at the Creswick Cenotaph:

At 18:50, Hepburn Shire Town Crier - Philip Greenbank announced to those present, the significance of this event.
​
Battle’s Over, an international commemoration marking 100 years since the guns fell silent at the end of World War I.

Organised by Pageantmaster Bruno Peek LVO OBE OPR, Battle’s Over takes place on November 11th 2018, with events throughout the United Kingdom, Channel Islands, the Isle of Man, and at scores of locations overseas, including New Zealand, Ireland, Australia, Bermuda, France, Belgium, Canada, the United States and Germany, to name but a few.

It begins at 6am with lone pipers playing Battle’s O’er, a traditional Scottish air played after a battle, outside cathedrals in the country, following which a specially written tribute will be read out. At the same time, over 1,000 pipers will be playing the tune in individual locations within their local communities.

At 6.55pm buglers will sound the Last Post at more than 1,000 locations, where at 7pm beacons will be lit in a tribute called Beacons of Light, signifying the light of peace that emerged from the darkness of four years of war.

Then at 7.05pm over 1,000 church and cathedrals will ring their bells as part of Ringing Out for Peace organised in association with the Central Council of Church Bell Ringers, which represents 65 societies of ringers from the British Isles and overseas. Also at 7.05, more than 140 town criers will perform a specially written Cry for Peace Around the World, the first of them in New Zealand and then across the globe through the various time zones.
Starting in New Zealand at the above times, each event would travel around the world over a 24 hour period 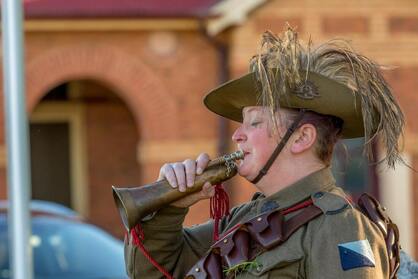 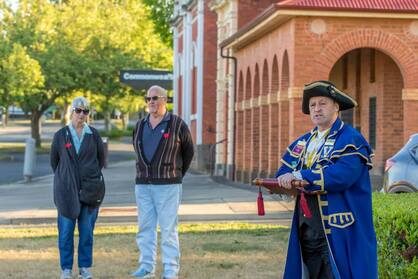