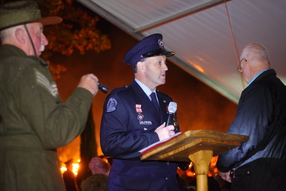 Dedication to the New Field of Crosses
After returning from the Second World War, Creswick RSL member Arthur Bellingham offered to set up the Field of Crosses for the RSL in the late 1950's.

Arthur handmade the crosses, and after learning the art of calligraphy, he painted the names on them

Last year Margaret Fullwood from the Creswick Museum, commenced a project, to identify all those who were born in the Borough of Creswick, and who enlisted in the First World War.

Using Margaret's list, the RSL decided to recognise those who enlisted in World War One, by displaying a cross, for each of these diggers and nurses, in our Field of Crosses.

As part of our project, the Buninyong Men's Shed made 1000 crosses for us.

In keeping with the tradition of  the hand written names, we went looking for someone who was skilled in calligraphy, and who was prepared to write names on over 1000 crosses.

We were fortunate to utilise the skills of Andrew Thomas, who painted names on all of the new crosses, as well as on many which needed repairing.

This project has taken over six months to complete.

This year, Creswick's Field of Crosses commemorates 1,109 men and women.

There are crosses for the 234 RSL members who served, and have subsequently died in peacetime, and 875 crosses from the First World War enlistment project.

We believe other enlistee names will be identified in the future.

The RSL would like to thank Margaret Fullwood for taking on this project and making it available to the RSL, the Buninyong Men's Shed for the creation of the crosses, Andrew Thomas for writing the names, and the local fire brigades for assisting tonight, with the torchlight procession as part of  our dedication ceremony.