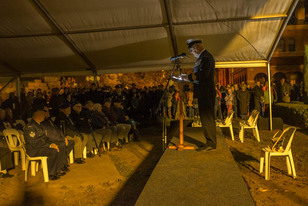 Mount the Catafalque Party.
From the 8/7th Royal Victorian Regiment based in Ballarat.
The Dawn Service has its origins in an operational routine which is still observed by the Australian Army today. The half-light of dawn plays tricks with soldiers eyes and from earliest times the half hour or so before dawn, with all its misty shadows, became one of the most favoured times for an attack. Soldiers in defensive positions were therefore woken up in the dark, before dawn, so that by the time the first dull grey light crept across the battlefield, they were awake, alert and manning their weapons. This practice was, and is, known as “Stand To”.

Presentation of lost  WWI Medals of Private George Bailey.
I’d like to talk about a local bloke who joined the AIF on 12 April 1916 at the age of 35.

He was a miner here in Creswick.

When he joined he was assigned to the 39th Battalion, 3rd Reinforcement  of the AIF.

The 39th Battalion was formed at the Ballarat showgrounds on 21 February 1916 and drew most of its recruits from the Western districts of Victoria.

He embarked from Melbourne on board His Majesty’s Australian Transport  Shropshire on 25 September  1916 and eventually made his way to France.

On 3 Mar 1917 he was hospitalised with a severe foot condition, this was  probably aggravated by all the footslogging through the mud he and his mates had to do.

16 Mar 1917  he re-joined  his Battalion and continued to fight in the trenches.

His punishment would have been completed on  5th June.

Three days later  on the 8th June he was killed in  action. He was gassed at  Messines  in Belgium.  His age was  36 years.

Mr F Bailey of Napier St Creswick was on Tuesday informed by the Defence Department that his brother Private G Bailey had been killed in action on the 8th June. The flag at the town hall was flown at half mast and regret was expressed by friends of the family at the sad occurrence.

George is buried at the Messines War Cemetery which is about 5 Km south of Ypres, in Belgium.

Recently George’s medals were found buried in the backyard of the house in Napier Street.

I have these medals here, and  I would now like to present them to  Jim Crone who is the grandson of Frederick (George’s brother)

POEM:
I came across this poem just the other day. It, like others, is a message about the meaning of ANZAC Day.
It is called simply “ANZAC Day”, the author I do not know.

I saw a kid Marching with medals on his chest.
He marched alongside diggers marching six abreast.

He knew it was ANZAC Day – he walked along with pride.
He did his best to keep in step with the diggers by his side.

And when the march was over, the kid was rather tired
A digger said “whose medals, son?” to which the kid replied:

“They belong to my daddy, but he did not come back
He died in New Guinea on a lonely jungle track,

The kid looked rather sad then a tear come to his eye.
The digger said “Don’t cry my boy and I will tell you why.

Your daddy marched with us today – all the blooming way.
We diggers know that he was here – it’s like that on ANZAC Day”

The kid looked rather puzzled and didn't understand.
But the digger went on talking and started to wave his hand.

“For this great land we live in, there’s a price we have to pay.
And for this thing called freedom, the diggers had to pay.

For we love fun and merriment in the country where we live,
The price was that some soldiers his precious life must give.

For you to go to school, my lad, and worship God at will
Someone had to pay the price so the diggers paid the bill.

Your daddy died for us my son – for all things good and true.
I wonder if you can understand the things I’ve said to you”

The kid looked up at the digger – just for a little while.
And with a changed expression, said with a lovely smile:

Act of Remembrance
On the morning of 25th April 1915 Australian and New Zealand troops landed under fire at Gallipoli, and it was then and in the violent campaign which followed that the ANZAC tradition was forged. The elements of that tradition have inspired and offered an enduring example to later generations of Australians. On this day above all days, we remember all those, whether service personnel or civilians, of every nation, who have suffered or continue to suffer because of war. In particular, we remember those who served in the Australian defence forces on land, sea and in the air, from the Boer War through two world wars, Korea and Vietnam, to Rwanda, East Timor, the Soloman Islands, Iraq and Afghanistan.

So we pay homage not only to those original ANZACS, but to all who died or were disabled in their service to their country. They enrich our nation’s history. Their hope was for freedom of mankind and we remember with pride their courage, their compassion and their comradeship. 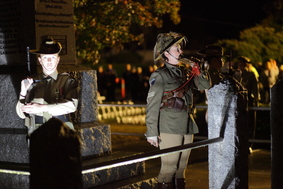 The Ode
“They shall grow not old as we that are left grow old,
Age shall not weary them nor the years condemn.
At the going down of the sun, and in the morning
We will remember them.” 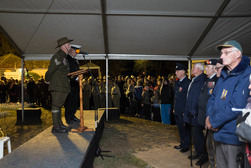 Stand Down the Catafalque Party.

Thanks to the Members of the Catafalque Party from the 8/7th Royal Victorian Regiment, Bugler Suzi Koene for taking part in the service today.

Alan Morris invited everyone to the Farmers Arms for Gunfire Breakfast.