Centenary of ANZAC Day Commemorations
CRESWICK 1915
"They Answered The Call" - Creswick Museum
On Easter Saturday the Museum opened its ANZAC Exhibition "They Answered the Call". The Creswick State School Honour Roll, made in the Sloyd class by pupils of both Creswick and North Creswick State schools, has two hundred and forty handcrafted poppies one for every name on the board.

The exhibition features AIF volunteers born in the district. The display also includes purple poppies for the animals that died in World War I.

The exhibition is on display until November but will be closed around August for a period of time due to structural works being done on the adjoining Town Hall. 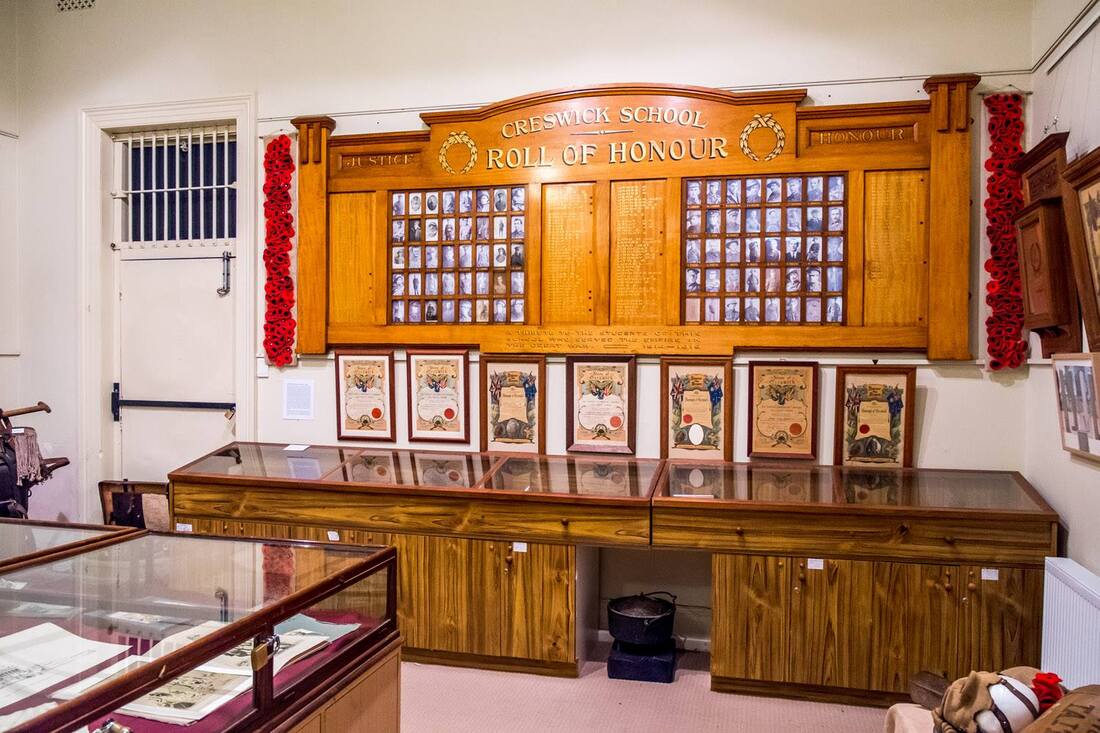 The Museum is working towards ANZAC 2015. The Creswick State School's Honour Board has been restored and is now in pride of place downstairs in the old Bank Chamber, the new name for the Mining' Room. At the start of WWI and for many years after the room was known as the Bank Chamber. The Museum is hoping to collect as many stories and photographs as possible of all those listed on the board. The original number of photos included on the board was eighty and altogether on the board are over two hundred names.

The board contains not only pupils from Creswick State School but also North Creswick State School. We are hoping to collect additional photographs to go with their stories. If you have a relative listed on the board the Museum would appreciate your help wither with information or a photograph. We can scan and reproduce the photo at the museum. We are also hoping to have a poppy for everyone listed on the board.
July 2014

The Creswick Museum has been awarded a Federal ANZAC Community Grant to restore the Creswick State School Honour Roll Board. The board was made by the Sloyd class, under the leadership of the teacher, Mr. Keogh, at Creswick State school after WWI. The board list the names of old students who served during WWI. The project was first discussed in December 1918 and was unveiled by Lady peacock in the Town Hall a year later. The honour board contains the names of two hundred and thirty six pupils who attended the school.

An unusual feature is the inclusion of eighty photographs on the board. Among the names listed are Allan Barnaldo and E.D. Lindsay, both artists. Sir Daryl Lindsay was to become a prominent artist and Director of the National Gallery. M. Lang (nurse), was later to establish the nursing unit for the Royal Australian Air Force in WWII. The museum is researching all the names on the board to record their stories and hopes to locate as many photographs of the other ANZAC's. It will be a major feature of the exhibition "They Answered the Call " to open next year.