Far from where the Golden Wattle blooms

The exhibition was opened on Friday 20th April 2018, by Ian Simpkins at the Creswick Town Hall and Creswick Museum.
​
The Exhibition  featured images taken by Caelli Greenbank of the WW1 men honoured on the Fallen Soldiers Memorial (now known as The Cenotaph), together with the Museum's images and their stories.

Ian spoke of Caelli's journey to visit the Creswick Soldiers resting places, starting from when she was part of the Spirit of ANZAC Prize tour of the Western Front in 2007,  then in 2014 when completing her Arts Degree in Languages in France and later in 2016 when teaching in Spain.

In 2007, as a 14-year-old, local girl Caelli Greenbank embarked on an incredible two-week journey through European World War I sites as a member of the Victorian Premier’s Spirit of ANZAC Prize 2007 Study Tour. While the Tour was an amazing experience for her, it also marked the beginning of a much greater undertaking for Caelli.

She returned to France again a few years later while studying at university, and when her parents came to visit her at the end of her year-long exchange, they spent a day visiting several cemeteries in the Somme region of France looking for more Creswick diggers. More recently Caelli and her mother went on a week-long road trip through northern France, revisiting cemeteries from previous trips and tracking down the final seven Creswick soldiers buried throughout the Somme. One is resting for eternity in a tiny cemetery surrounded by a wheatfield with just 58 others; another is one of 11,000 soldiers interred at the Etaples Military Cemetery on the site of an Allied hospital. Two sets of brothers, two soldiers of the New Zealand Expeditionary Force and even one of the famous Lindsay brothers make up just some of the Creswick names scattered among the cemeteries and memorials of Europe.

The most far-flung grave Caelli has visited wasn’t even on the European mainland. Second Lieutenant William Parkes was part of a flying squadron that crashed during a training exercise in England. During a recent visit to London, Caelli hired a car and drove west to where Lieutenant Parkes is buried alongside his squadron in the local cemetery of a small town called Boxwell-with-Leighterton near Bristol in south-west England. He was just twenty-six years old when he died.

Over the past 10 years Caelli has located 24 of the soldiers on the Creswick cenotaph spread throughout Turkey, France, Belgium, and England. Sadly, the project remains incomplete. After being injured at Gallipoli in 1915, Private Frank Arnold Lambert was evacuated to Egypt, where he died of his wounds. The 18-year-old is buried at Chatby Military Cemetery near Alexandria, where current conditions make it unsafe to travel. Caelli hopes to make the journey to Egypt in the next few years, so that the 25th soldier of the Creswick cenotaph can be remembered to his community along with his comrades. 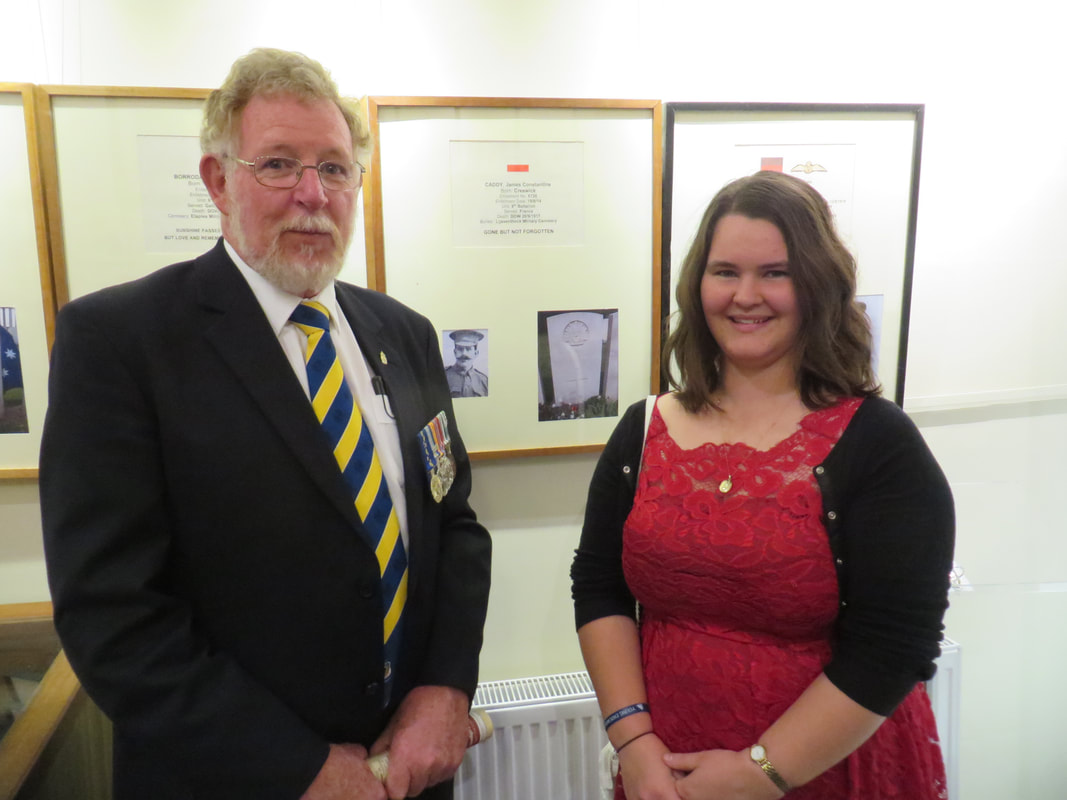