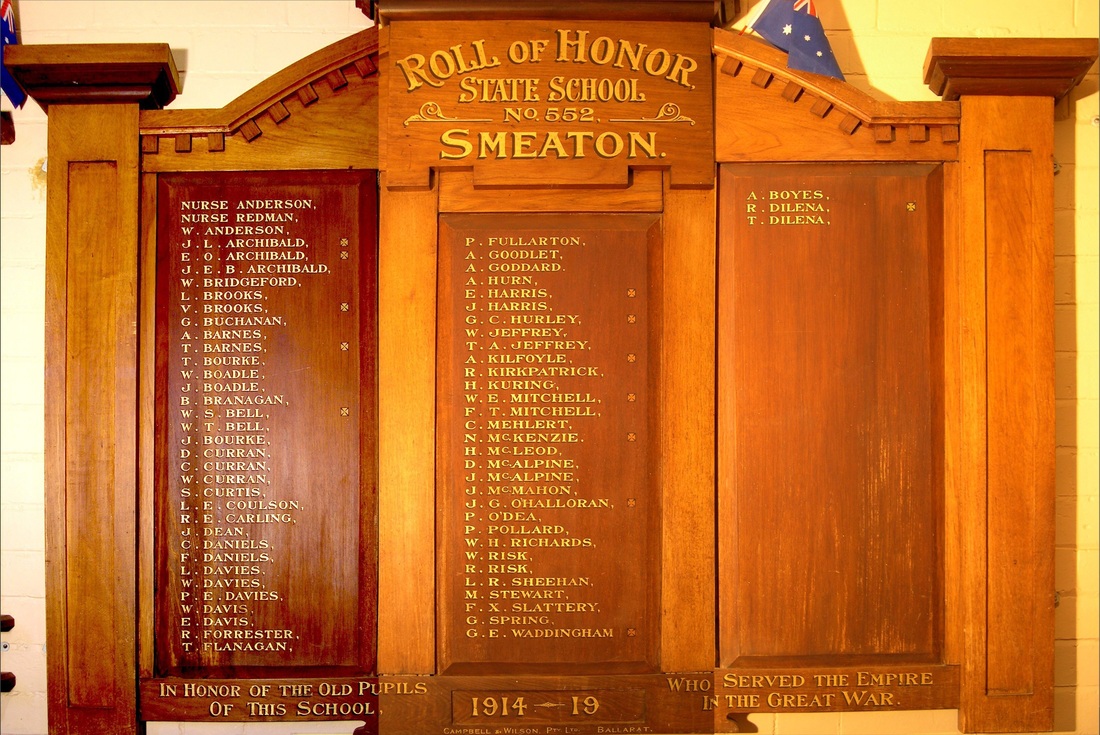 A most important event in the history of the Smeaton State school took place on Friday, 29th November, when the Roll of Honour, erected in memory of the former pupils of the school who served the Empire in the great war, was unveiled. The proceedings opened with the National Anthem, and after the president of the shire (Cr. F. H. Carter) had addressed the gathering, Lady Peacock, in a very appropriate speech, performed the ceremony of unveiling the Honour Roll, which is a fine piece of work in polished blackwood, and contains the names of 69 former pupils of the school. Those assembled were favoured with a fine address by the Director of Education (Mr. Tate), who, after speaking on the nobility of purpose which had prompted these brave former pupils of the school to volunteer for service abroad, and the sufferings and sacrifices they had endured in their country’s cause, reminded those assembled of the deep obligations they owed to these men, and, in terms which might well be remembered, stressed the fact that all should work in unison towards fulfilling the promises made to them, thereby showing in some measure their keen appreciation of the manner in which they had acted. The District Inspector (Mr. Hurley), and the Rev. R. Thomson also addressed those present. After the National Anthem was sung, the “Last Post” was sounded by Mr. P. Northcott as a tribute of respect to those gallant heroes who “Sleep beyond the foam” After the ceremony all present were entertained in excellent style by the ladies, who deserve the highest praise for the splendid manner in which they executed their portion of the programme.
Kangaroo State School - The Great War     Lawrence School No. 3275- World War II