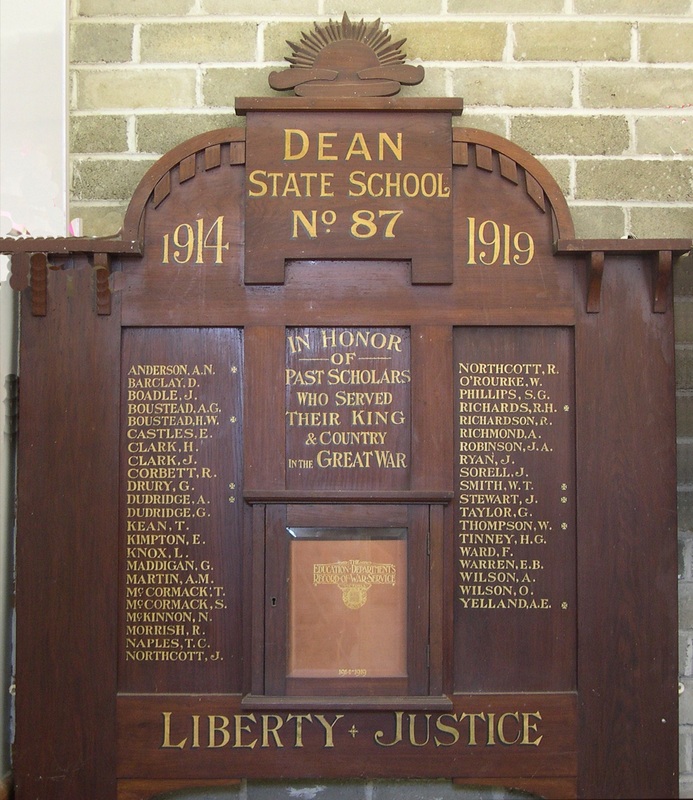 Some time ago the residents of the Dean district had an honour roll erected and unveiled in the Mechanics’ hall. From the point of view of the general public that was very satisfactory, but it was felt by those concerned that one should be obtained for the Dean State school, which had a very good record of enlistments of “Old boys”. By this means the attention of the rising generation from time to time would be drawn to the great sacrifices made on their behalf, and for King  and Country, by the Australians who participated in the Great War, and who did much in bringing about the ultimate victory for the British Empire and the Allies. As a result of the efforts put forth, the school authorities were able to secure a very handsome piece of work to be placed in the school. For the sake of convenience, and to permit of a greater number participating in the ceremony than would have been the case if it took place in the school, it was decided that the unveiling should be performed in the Mechanic’s Hall last Friday night. There was an excellent attendance, and the people were not only able to witness the unveiling, but to listen to a splendid concert programme, the arrangements being placed in the hands of Mr. Alex McKenzie, who left no stone unturned to ensure the success of the whole performance, which was undoubtedly achieved. The head teacher (Mr. W. M. Hobbs) took a keen interest in the affair, as did the members of the school committee and others, so everything passed off well. Sir Alexander Peacock, the Minister of Education, had been invited to preside on the occasion, but the engagement was overlooked when the Minister was making arrangements for a tour of the Gippsland schools, and he found that he was unable to be present. However, he had a very worthy representative to perform the unveiling ceremony in Lady Peacock, who had given Sir Alexander great support in movements of this kind. Cr. Fred H. Carter had agreed to act as chairman, but ill-health caused his close retirement to his home for the evening, and at his request Captain Thos. Parkin, J. P., willingly presided over the gathering.

After the National Anthem had been sung, Captain Parkin explained the circumstances under which he was presiding that evening. He remarked that Sir Alexander seemed to be run off his legs of late. He was delighted to see so many present to witness the unveiling of the honour board, and the presentation of the War Service Book of the Education department.

The concert programme was a most enjoyable one, and those who gave it can be congratulated on their meritorious performances. Mrs. Rogers played the overture, songs were contributed by Mrs. Robinson, the Misses Fraser (2), Connelly, Gibbs (2), Messrs. Bert. Richards and P. Pearse; a vocal duet was rendered by the Misses Gibbs; an instrumental duet by Miss A. Fraser (violin) and Mrs. Rogers (piano); and a recitation by Mrs. McPhan. The accompaniments throughout were capably played by Mrs. Rogers.

Captain Parkin said he was delighted to come along and help the Dean people, and to assist in the unveiling of the school honour board. There were a great many honour boards in the shire, and the people of the district deserve every credit for placing on record the names of the boys who went to the war, but it really was their duty to erect those honour boards. One had been placed in that hall, and he was pleased they were also putting one in the school. The chairman made some interesting comments regarding what his sister had seen in her tour of the battlefields. The mothers of those who lost their lives overseas need not worry, for the French people will do all they can with the War Graves’ Commission to look after the graves of those who made the supreme sacrifice. He again congratulated the people of the Dean district on doing their duty in erecting the honour board in the school, and introduced Lady Peacock, who had been given the duty of unveiling the board.

Lady Peacock was greeted with applause. She first spoke of Sir Alexander’s regret at his absence that evening. She congratulated the people on such a fine gathering. It was a duty and a privilege to be present on such an occasion, in honour of the boys who did so much for us. They already had a fine board in the hall, on behalf of the district, and now they would have one in connection with the Higher Elementary School. They knew the sacrifices of our boys and what they had done for us, and we are enjoying the freedom for which they had fought. The board would be placed in front of the boys and girls at the school, and would be an incentive to them to live up to the high standard the Australian soldiers had set, for they had gone overseas so that the boys and girls might be protected. The erection of these honour boards was a very fine idea. There were 42 names on the school honour board. She hoped when the boys and girls saw it before them, it would make them feel that they must act up to the standard set by those whose names appeared on it. She was sure they would nobly fulfil their duty just as our boys had done in the Great War. It was quite right that this generation should place on record the names of those who had gone to the front, many of whom had given up their lives. It was hard for the mothers who had lost loved ones, but when they saw that the memory of their boys was being kept green by means of these honour boards, they would be prouder than ever of them. After referring to the visit of the Prime Minister to the Glengower State school, to present a flag from the children of Amiens, in France, Lady Peacock said she had much pleasure in unveiling the honour board, in memory of all the brave boys who had done so much for us.

All in the audience stood whilst Lady Peacock removed the flag used to drape the board.

The honour board is an exceptionally fine one, and was made by Mr. W. J. Ellingson, of Sturt Street, Ballarat. It is surmounted by the rising sun, the emblem of the Australian forces. Panels on either side carry the names of the former scholars of the school who took part in the Great War. Across the top is the lettering, “Dean State School, No. 87” The figures 1914-1919 denote the service abroard of the troops, and below the following appears in the centre:- “In honour of Past Scholars who served their king and Country in the Great War.

Then there is a glass-fronted case to carry the Honour Book of the school and on the lower panel appears the words, “Liberty, Justice.”

The names appearing on the board of the past scholars who gave their services in the war are as follows:-

This shows a total of 42 and 7 who made the supreme sacrifice.

The remaining recorded procedure has not been able to be transcribe completely.

At the request of Lady Peacock the list was read by Mr. Hobbs. Lady Peacock said the Dean      could be congratulated on such     board. All honour to these      names appeared on it.

Lady Peacock then performed the duty of handing to the head    the most interesting publica     Education Departments; Record of War service. She was sure     would be very proud to      book, in which she noticed     Dean school had raised  £    the war funds. The book    more valuable and interesting     years to come.

Mr. Hobbs received the honour board on behalf of the school, and thanked Lady Peacock for presenting it.

At the conclusion of the programme, Mr. A. E. Kay,     man of the school committee   a hearty vote of thanks to Lady Peacock, Captain Parkin, the teachers and accompaniste, and    had assisted in the success of  the gathering. He referred to the interest Sir Alexander and Lady Peacock had taken in all movements regarding the war, and they had   that interest ever since. They   to thank Mr. Alex. McK   took upon himself the task of   up the concert; the result was a credit to him, and they    thankful to Mr. McKenzie.

Mr. T. Robinson seconded     with pleasure, and it was     acclamation.

Lady Peacock responded    of the recipients, stating    only a duty, but an honour    they could to assist. It      great delight to her to be

The ladies provided an    of refreshments for all pr   which the floor was     dancing indulged in.