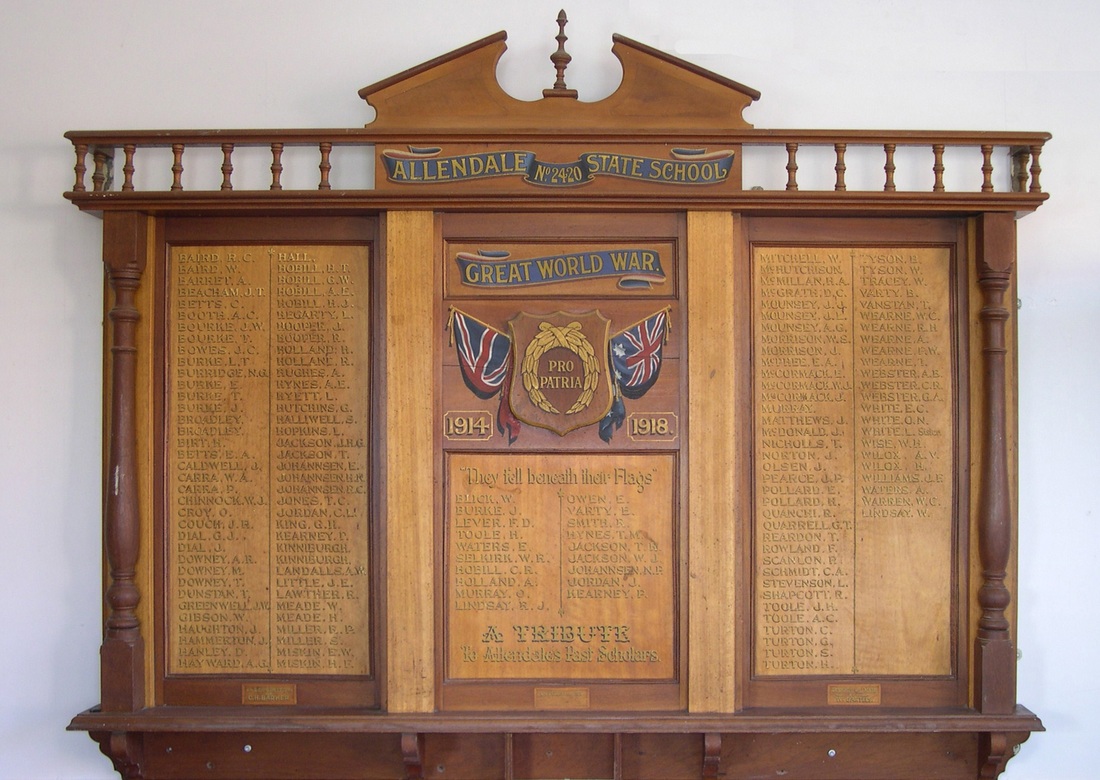 The ceremony of unveiling the honour board erected in the Allendale State school, commemorative of those who had served in the war, proved a most successful event on Friday afternoon last, when there was a crowded attendance, many parents having come long distances to witness the proceedings.

The honour board is of most artistic design, having been constructed by Mr. Wm. Bartels, a local wood worker, who had displayed much skill and taste in arrangement, and Mr. Chas. Barker, of Kingston, had executed the decorative details in a most attractive manner.

The organisation of the gathering was promoted by the school committee- Messrs H. Collins (chairman), W. Richardson (hon. secretary) and Robt. Johnson (hon. treasurer), and Mesdames Collins, Richardson and Johannsen- who have had a difficult task to compile the lengthy records of those who have attended the State school, with which is now combined  the scholars that were formerly associated with the Catholic school.

To raise funds several movements had to be promoted, and the result is that a sum of £7 is still required to liquidate the liability, and this it is expected will be forthcoming, besides some additional expense that will be incurred in adding some names that have been inadvertently overlooked when the records were compiled.

Mr. J. T. Sloan, J. P., presided on the occasion, and after the National Anthem had been sung, the chairman apologised for the absence of the Hon. Edmund Jowett, Federal representative for the Grampians; Mr. F. Tate, Director of Education; and Mr. T. Hurley, district Inspector of schools.

The chairman in opening the proceedings, expressed the appreciation of the organisers of the gathering that there was such a large and representative attendance, for the task they had undertaken required care and research before a perfect record could be compiled, consequently the ceremony had been delayed. This school had much reason for pride that so many of the old scholars had engaged in the colossal war in Europe, whilst their feeling of pride was mingled with sorrow that many of the old scholars had fallen, and had been buried in foreign lands. The honour board would be an adornment to the school, and a faithful record of the old scholars who had served in the war.

Sir Alexander Peacock, M.L.A., addressed the gathering upon the splendid service that had been given by the Australians, which meant so much for humanity and freedom. His personal acquaintance with many of the parents of the scholars who had attended the local schools had enabled him to trace many of them in their war experience; they had reason to feel proud that, through the gallant service the Australians had given, the war had ended in favor of the Allied nations. The collapse of the German morale after the Hindenburg line had been pierced is now admitted by all the war historians, particularly the enemy authors, who also recognised the important part of the warfare contributed by the Australians, who they never previously regarded as military opponents. An outstanding feature of the war was the huge task that had fallen to Britain, to organise her military strength, control the freedom of the seas, and check the submarine ravages, while they transported huge armies and food supplies from distant parts of the Empire. On many occasions the position seemed almost one of despair, for the outlook was depressing, until such time as the Allied nations came into close union and operated under single military command. The Germans had dreamed visions of overpowering the Allies and conquering the world, but they now had reason for repentance that their military power had been responsible for the destruction of their nation and their despotic power and tyranny. It afforded him intense pleasure to be present on this occasion, for he had much admiration for the boys who severed their home circle to serve their country.

Cr. David Anderson, president of the Creswick Shire, said that this municipality was proud of the important service that the boys from the shire had given in the critical stage of the war. Many honour boards have been erected in the various schools and public halls of the shire, recording the names of those who had served, and in years to come these records would be interesting. It afforded him much pleasure to represent this municipality on such an occasion.

Lady Peacock, before unveiling the honour board, expressed her appreciation of the good service the school committee had contributed by having a record established in this community of those who fought in the war. The parents had an anxious time all through its progress, while many had grief and sorrow. The younger generations would best enjoy these records, for it would mean to them a high standard of duty and citizenship, which they would be encouraged to emulate. The curtain having been drawn, Lady Peacock complimented the designer upon the skill he had exercised, and the decorator upon the nice taste he had displayed in ornamentation.

The school children, assisted by the audience, joined in singing the “Recessional” hymn, after which Mr. J. G. Cannon, head teacher of the school, accepted the custody of the honour board on behalf of the school, when he gave the assurance that it would be carefully preserved for all time, and that when the opportunity offered the children now in attendance would be instructed in many features of the war, as well as reminded of the share that many of the old scholars contributed towards securing victory for the Allies.

Mr. R. Ogilvie attended to the musical accompaniments in his usual proficient manner.

Mr. H. E. Miskin expressed his thanks for the erection of the honour board as a parent of two boys who had been on active service, and Sergeant Hopkins, of Newlyn, who was the first volunteer from this part of the shire, and saw service in Gallipoli, acknowledged its erection on behalf of the soldiers.

The National Anthem being sung, afternoon tea was served by the ladies, and an enjoyable hour was spent by the company, when much attention was given to an inspection of the honour board, which revived many memories of old families of the mining period.
﻿ANA Honour Boards
South African War                      and                 Great European War﻿