Memorial gates and arches are architectural monuments in the form of gates and arches or other entrances, constructed as a memorial, often dedicated to a particular war though some are dedicated to individuals. The function is similar to but different from that of a triumphal arch, with the emphasis on remembrance and commemoration, rather than celebration and victory, though some memorial arches perform both functions. They can vary in size, but are commonly monumental stone structures combining features of both an archway and a gate, often forming an entrance or straddling a roadway, but sometimes constructed in isolation as a standalone structure, or on a smaller scale as a local memorial to war dead. Although they can share architectural features with triumphal arches, memorial arches and gates constructed from the 20th century onwards often have the names of the dead inscribed on them as an act of commemoration.

DEAN HAPPY FOR ITS WEEK-END CENTENARY CELEBRATION-Dean was happy for its centenary, the people who have been home and gone again left happily, those who live at Dean are quite happy about the way everything went off with a swing.  They put it all down to ready co-operation on the part of residents and visitors.  And, too, the weather, for it was "half the battle."

The show started with a welcome social last Friday evening, ran through school ceremonies and a big sports meeting on Saturday with a concert at night, church services and 'visiting' on Sunday and informal cricket and tennis on Monday, winding up with the centenary ball on Monday night.

Looming large in the week end of events was probably the opening of the memorial gates but the idea of a 'Back to Dean' had been talked about for two or three years.  For a time this was deferred awaiting the arrival of electric supply in the district and when the imminence of electric supply brought the subject up again, it was discovered that 1951 would be Dean's centenary year.

Memorial gates had also been a subject in mind since the closing of the fund raised for welcoming service personnel back from the 1939-45 war.  When that fund was wound up, some of it was devoted to helping maimed servicemen and some set aside to open a fund for memorial gates at the school.  With a donation from the school mothers' club, this fund stood at £70 an early meeting about the Back to Dean thought it would be nice if the gates could be ready for the occasion, so the work was put in hand.

These gates commemorate those scholars of Dean school who paid the supreme sacrifice in the world wars of 1914-18 and 1939-45.

MEMORIAL GATES OPENED -The unveiling of the memorial gates was performed on Saturday morning by a former teacher at Dean, Mr. J. S. Bacon, B. A., and Mrs Bacon cut the ribbon as her husband declared the gateway open before a large crowd.

Granite wings lead in to the four granite columns which support the wrought iron hand-gates either side of a cattle pit entrance from the main road.

Introducing Mr. and Mrs. Bacon to the large crowd, Mr. George McKay as president of the Centenary Committee, again welcomed everyone and expressed the committee's great pleasure at seeing so many take such a great interest in this important event.  He said the people of Dean believed the Anderson family arrived in Adelaide on 'Black Thursday,' 1851, and shortly after that they arrived at Dean to commence the first industry in the district.  From then began to grow the community as it is today.

He had found the people, in the warmth of the friendship, to be the qual of the beauty of their district.  He went on to congratulate the people on their thought and on bringing their thought to fruition in this fine memorial entrance.

He could imagine nothing better than these gates which would stand to give their message to many generations entering the school.  In his day there were 140 on the roll at Dean school.  Today, with the change of the times and change of population it had dropped to 22 but his was a fine site and he felt it could very well be made into a district school.

Introducing other speakers, Mr. McKay took the opportunity to say "We have some good records, ____ from among the scholars of this school- I might mention two by way of example:  There is John Northcott, now Sir John, and Governor of N.S.W.  There is also Marie Cutbush who, as a scientist, is about to publish a book in collaboration with a professor with whom she has been working.

Mr. A. C. Pittard in a supporting address referred to the industry and initiative of those who pioneered the district and those "I'm not so concerned about what happened yesterday or 100 years ago who now work it, keeping it one of the most productive areas of this State.  The men in whose honour the gates are being opened leave a tradition of patriotism of which this district can be proud.

Mr. R. White, M.S. A., congratulated Mr. McKay, Mr. Cutbush and their committee on the wonderful preparation for these celebrations.  He quoted an Australia Day utterance of Sir Edmund Herring:  but I'm extremely concerned with what is happening today and what will happen tomorrow." 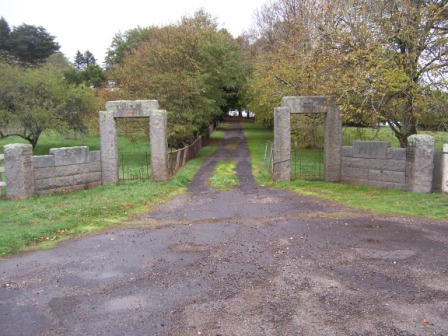