The Remembrance Poppy and what the colours mean.

The Remembrance Poppy (a Papaver rhoeas) has been used since 1920 to commemorate soldiers who have died in war. Inspired by the World War I poem "In Flanders Fields", they were first used by the American Legion to commemorate American soldiers who died in that war (1914–1918). They were then adopted by military veterans' groups in the United Kingdom, Canada, Australia and New Zealand.

In Australia, the poppy is widely sold and worn on Remembrance Day. It is mainly sold on the Friday before 11 November, widely known as Poppy Day organised by Australian Legacy for war widows and orphans. At Remembrance Day ceremonies the poppy is worn by the Governor General, State Governors, politicians, military and members of the public.

The poppy is not traditionally worn on Anzac Day, although the practice is becoming more common, particularly at overseas commemorations such as in London. Rather than wearing a poppy, the traditional symbol of remembrance on Anzac Day is a sprig of rosemary, which symbolises the wild rosemary the first troops ashore at Gallipoli had to use to pull themselves up the steep cliffs they were landed beneath.

During the First World War, red poppies were among the first living plants that sprouted from the devastation of the battlefields of northern France and Belgium. Soldiers told the story that the poppies were vivid red because they had been nurtured in ground drenched with the blood of the soldiers’ comrades.

The sight of the poppies on the battlefield at Ypres in 1915 moved Lieutenant Colonel John McCrae, a Canadian, to write the poem “In Flanders Fields”. Flanders poppies also featured prominently in several other literary responses to the destruction on the Western Front. During the First World War, the poppy took on powerful symbolism – that of sacrifice.

The poppy soon became widely accepted throughout the allied nations as the flower of remembrance. It has been a part of commemoration ritual since the early 1920s and continues to be used for this purpose today.

An American, Moina Michael, read McCrae’s poem and was so moved by it that she wrote a reply poem "We Shall Keep the Faith" and decided to wear a red poppy as a way of keeping faith, as McCrae had urged in his poem.

The meaning of the Poppy colours

Most people think there is only one poppy to be worn for remembrance, but, in reality, there are four Remembrance Poppies which can be worn: Red, White, Purple and Black.

The Red Poppy
The Flanders poppy has long been a part of Remembrance Day, the ritual that marks the Armistice of 11 November 1918, and is also increasingly being used as part of Anzac Day observances. During the First World War, red poppies were among the first plants to spring up in the devastated battlefields of northern France and Belgium. In soldiers' folklore, the vivid red of the poppy came from the blood of their comrades soaking the ground. 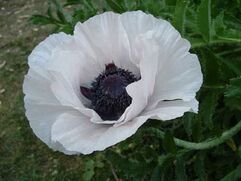 The White Poppy
The white poppy is an international symbol of remembrance for all the casualties of war - civilians and armed forces personnel - and of peace. Some people see it as an alternative to the red poppy, others see it as complementary; some choose to wear both poppies, some one or the other, and some no poppy at all. 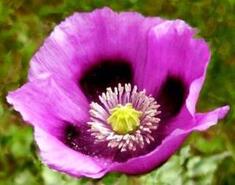 The Purple Poppy
The purple poppy remembers animal victims of war and human violence. Animals cannot volunteer and have no choice in becoming involved in war when they serve alongside human military personnel. Like humans, animals living in war zones suffer from the effects of war – injury, stress, lack of food and water. 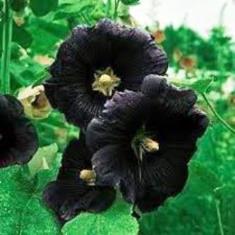 The Black Poppy
The black poppy is a symbol that commemorates all those who have died, and are still dying, due to war and its legacy. It remembers dead soldiers, dead civilians, dead conscientious objectors. It remembers those who have fallen victim to invasion, occupation, gender-based violence, starvation and poverty.