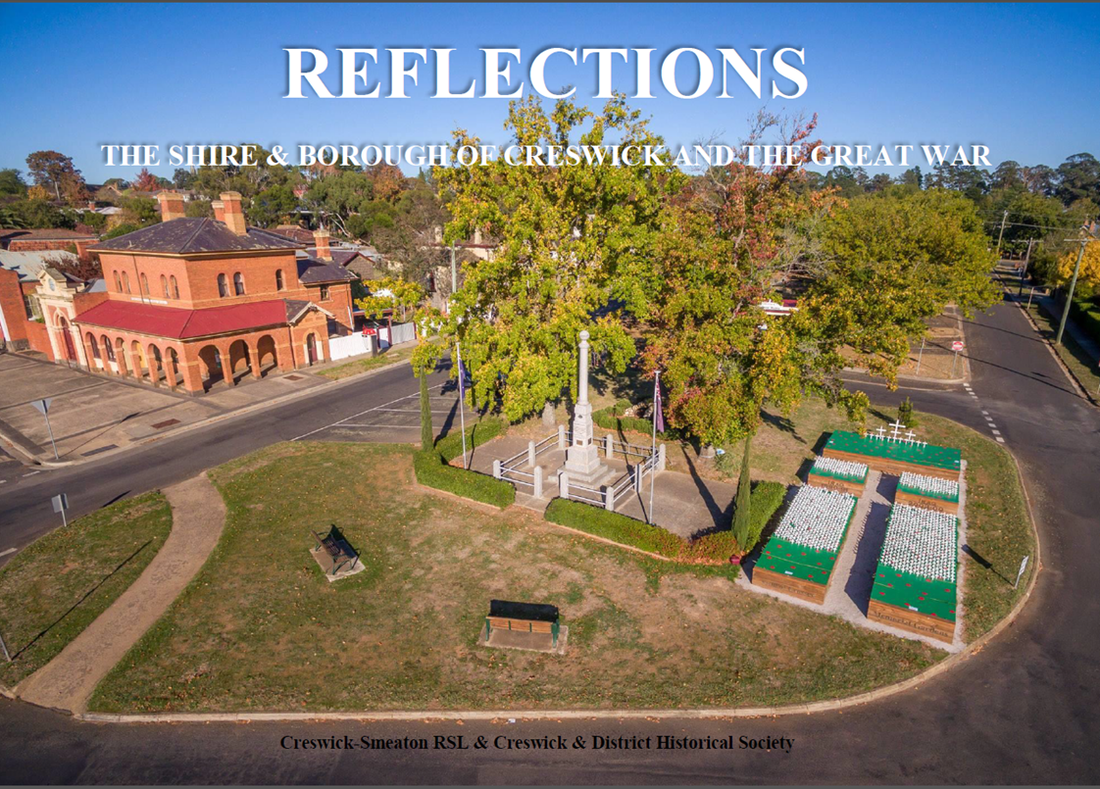 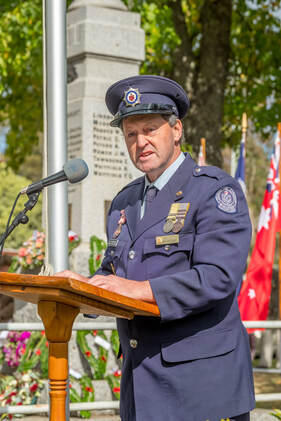 I would like to acknowledge that we are meeting on Jaara people country and pay my respects to the  Dja Dja Wurrung community, their elders past, present and emerging.

This book started out as just a list of names for an exhibition.

In 2013, Margaret Fulwood from the Creswick Museum attended the annual conference of Museums Australia (Victoria), held in Geelong.

A discussion about the forthcoming World War 1 celebrations, especially the imminent Gallipoli centenary, uncovered the fact that there was a government grant that would be available to restore historic plaques and honour boards. In need of restoration was the Creswick School Honour Board. This restoration would spark the idea for Margaret of a much larger project of commemoration.

The Museum’s artefact collection included several items listing the names of local enlisted soldiers, such as the Creswick State School & North Creswick School Honour Roll books, as well as other resources like a database of honour roll boards of the district and a complete set of the Creswick Advertiser, digitised through to 1970. To supplement those sources, Margaret ran a search on the National Archives of Australia website ‘Discovering ANZACs’, looking by town names. Her first sweep yielded just under 800 soldiers’ names.

The Museum’s criterion for inclusion on the exhibition list was that the soldier or nurse was born in the Shire of Creswick, including the Borough of Creswick at the time of enlistment, but a major problem was many of the enlisted men gave their birthplace as Ballarat.

The Shire and Borough of Creswick covered a total of 29 towns.

In late 2014, the Creswick-Smeaton Returned and Services League (RSL) Sub-Branch met with Margaret about her project and added her research to their website, listing 871 names of local servicemen and women and linking each with their service records on ‘Discovering ANZACs’.

This allowed the community to view the names and let the RSL know if a family member had been missed. In July 2014, RSL decided to place a cross for each of the 871 names in the Field of Crosses as part of their 2015 Commemoration events.

With the assistance of the Buninyong Men’s Shed, which made 900 crosses, and calligrapher Andrew Thomas, who hand-wrote each name on the crosses, the Field of Crosses on ANZAC Day 2015 had just on 1100 crosses on display. This was originally intended to be a one-off event, but due to the response from the community, the WW1 crosses are now a permanent part of the Field of Crosses Memorial.

In January 2015, the Creswick & District Historical Society (CDHS) approached the Creswick-Smeaton RSL about putting a book together on the Creswick and district men and women who served in the 1st World War. In February, following a combined meeting with the CDHS and RSL, it was decided that the book would be based on the RSL WW1 Crosses and Phil Greenbank from the RSL was appointed as Project Coordinator.

As this meeting we were discussing a title that would best cover the criteria that was used, and I would like to thank the then President Jack Van Beveren who suggested the title “Reflection – The Shire and Borough of Creswick and the Great War”

Research for the book started in October 2015, with Margaret’s list of names of Creswick servicemen and women being divided into four smaller lists that were distributed among four members of the Historical Society, who were taking on the detailed research of the enlistees’ service records. This research was made easier by the fact that the names on Margaret’s original list that were added to the RSL website, had already been linked to each of the service personnel’s records on ‘Discovering ANZACs’.

Shortly after the research started, two members dropped out, leaving Val Lawrence and Marjorie Poole. Once the pair finished researching the names on their own lists, Val then took on the research for the two remaining lists. After the four lists had been finished, Val then cross-checked all the names on the local honour boards to identify any that may have been missed due to their place of birth not being recorded correctly. Over 90 new names were added to the enlistees’ list as a result.

With the initial research completed, Phil Greenbank commenced the setting out of the book, along with supplemental research into the names of the ships that transported our troops and the abbreviations used in the service records, which would be known to those in the Records Office at the time, but not to us 100 years later.

Over the next four years additional names were submitted for the book with over 80% meeting the book’s criteria. In February 2020, the book went to the printers for a launch on ANZAC Day, but COVID-19 restrictions cancelled the ANZAC DAY service. At this time, another 20 names were submitted and as the book has not been printed due to COVID, it was decided to include any names that qualified. Eleven met the requirements.

Research revealed stories like that of Gilbert Brinsden, a shopkeeper over the enlistment age who was both a Justice of the Peace and local councillor and was sent white feathers. He later enlisted and was killed in France; the Museum now holds his brass memorial plaque otherwise known as the “Dead Man’s Penny”. The Museum’s collection also includes the Dead Man’s Penny for Felix Vague, who is probably the first man from the Creswick district to have been killed at Gallipoli.

The Lambert brothers’ story is still well-known in the area, losing three of their four sons who enlisted.

Thomas Astley enlisted on the 14th December 1914, 5 months before Australia went to Gallipoli, and was discharged on the 28th June 1919, one of a hand full of Australians who served the entire length of the war. Unlike many soldiers who would be in and out of hospital on multiple occasions due to illness or injury, Thomas medical history only shows two stays in hospital due to illness.

From the longest to the short of just 26 days after enlisting, was discharged as unlikely to be an efficient soldier.

There are also several names that were underaged at enlistment and one such enlistee was soon sent home after the Records Office at Victoria Barracks receive a letter from his mother stating that he was underage and would they please bring him back home.

The book has many entries of men classed as deserters. For whatever reason, nearly 50% of them would re-enlist and over 75% would be killed in action.

At times it has been hard putting this book together and I think Val would agree with me, when researching their stories and in some cases the letters that were sent to the families to advise that their loved ones were injured or killed and those of the families trying to find out information from the Military Headquarters.

Of the 180 specially-marked crosses, 176 made the supreme sacrifice overseas - 123 Killed in Action, 40 Died of Wounds, 10 Died of Illness Overseas and 3 from Accidental Death one of whom you heard about today. 4 Died of Illness in Australia before embarking One died 33 days after enlisting and another on the ship from Melbourne to Albany .
Nine were Prisoners of War, of which one dying in captivity.

Today many of those towns are in name only, as sons never returned home to take over the family farm or business, football teams no longer had enough players and young ladies has no men to fall in love with.

One in six enlistees did not come home. This book is dedicated to the 979 men and women who enlisted and to those who made the supreme sacrifice.

Shortly we will have the book available for purchase but first I acknowledge those organisations that assisted and provided the support to allow such a resource to exist. I would like to make acknowledge Peter Rickard, the author of Sentinels of Service about the Kingston Avenue of Honour. Peter & I have been assisting each other with our respective books and when I was putting together the list of acknowledgements in the book, I unfortunately left Peter out. So, thanks Peter if you are here today.

We also wish to thank the Victorian Veterans Branch and the Victoria Remembers Minor Grant Program for their assistance with the books publication.

I would now like to ask that the school captains or student representatives from the following primary schools to please come forward to receive a copy of the book for the school’s library.
Creswick PS, Creswick Nth PS,  St. Augustine’s PS, Newlyn PS and Mt. Blowhard PS. 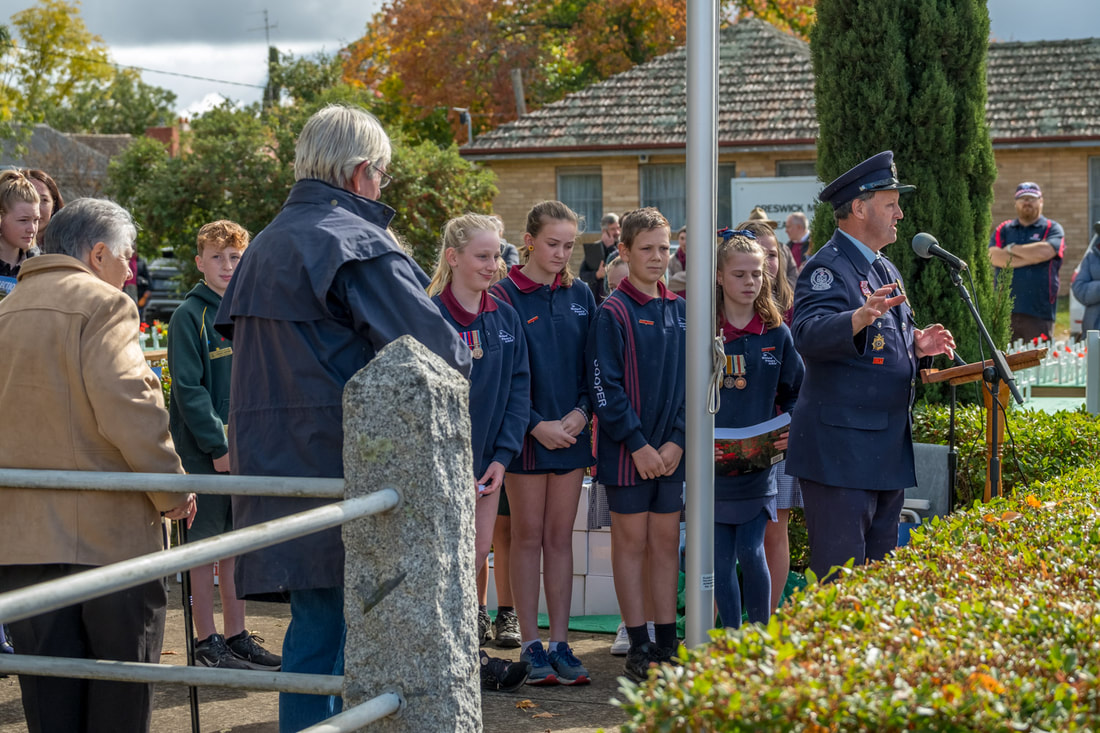