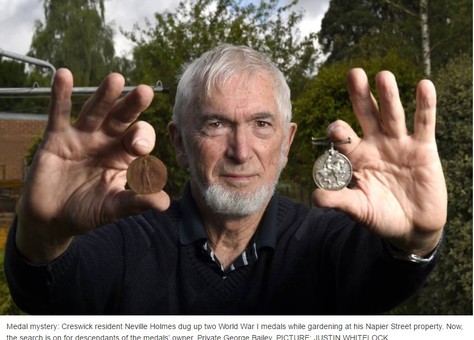 In October 2014, George’s medals were found buried in the backyard of the house in Napier Street.

A SEARCH is under way to find the descendants of a fallen World War I solider.

Almost 100 years after his death, Ballarat solider Private George Bailey’s precious war medals were found buried in the backyard of a Creswick house.

Napier Street resident Neville Holmes was tending to his wife’s irises late last year when he dug into a secret trench.

“I could see bits of bottles and broken glass, so I kept digging deeper and deeper to see what was under there,” Mr Holmes said.

Underneath the layers of dirt he discovered the contents of an old medicine cabinet.
“There were tubes and tubes of toothpaste, combs, tooth- brushes, a pair of dentures and medicine bottles,” Mr Holmes said.
“But something caught my eye.”
Hidden among the shards of broken glass, Mr Holmes caught a glimpse of what he believed was a pair of rusty coins.
“I looked at them and thought to myself, ‘These are worth holding onto’,” he said.
“I pulled them out and realised what they were. I was astonished.
“The medals were such a contrast to the rest of it.”

For a few weeks, the medals sat on a shelf in Mr Holmes’s house before he wrapped them and took them to Creswick RSL secretary Phil Carter.
Mr Carter said he was floored by the discovery.
“The hairs on the back of my head stood up,” he said.
“I get shivers talking about. “It was very emotional because once I looked on the side of the medals and saw a name engraved, I knew what he’d found.
“To find something like this is unheard of, it is just so special.”

​Private Bailey was part of the 39th Battalion and enlisted in the war in Ballarat on April 12, 1916.
He was killed in a gas attack in a field in Messines, Belgium, on June 18, 1917.
He was 36 years old and had never married.
Following his death, his medals were presented to his bother Frederick, who lived at the Napier Street home with his wife Mary-Ann for most of his life.
Another of Private Bailey’s brothers, Charles,  also served in the war.
There were another three brothers, James, Thomas and Joseph.
Mystery surrounds why the medals were buried in the backyard, and Mr Carter said it was likely the reason would never be known.

​Members of the Creswick RSL have made it their mission to find members of George’s family and present the medals to them at the centenary Anzac Day service in Creswick on April 25.
It is hoped members of the family can wear the medals and march in Private Bailey’s honour.
Mr Carter said the discovery had stirred something inside all of the RSL members. The medals are in the process of being restored to their former glory in Ballarat.
He is appealing for anybody with information or links to the Bailey family to contact him on 0458 533 230.
George Bailey's medals as found before restoration 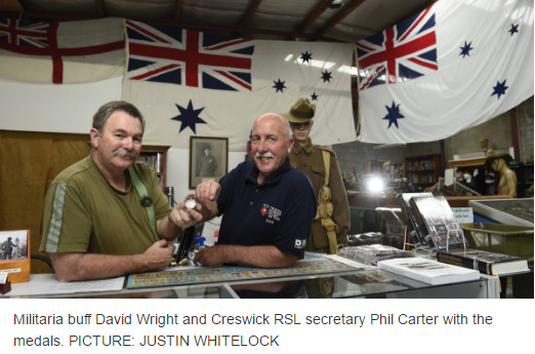 THE lost medals of a fallen Ballarat World War I solider will be restored to former glory and presented to his descendants.
Almost 100 years after his death, Ballarat solider Private George Bailey’s war medals were found buried in a secret trench in the backyard of a Creswick house.

He was 36 years old and had never married.

Mr Crone, who lives in Saint Arnaud, contacted Mr Carter after watching the evening news last week.
“I saw it on the television and I wondered if it could somehow be connected to my mum’s family from Creswick,” Mr Crone said. “I had never heard of George before. My grandfather was elderly when I was just a boy. He had never mentioned him to me, but something made me want to look into it.”

Mr Crone said he would be honoured to walk in his great-uncle’s honour at the Creswick Anzac Day march on April 25.

The Creswick RSL has also been contacted by descendants of Private Bailey’s other four brothers.

On Wednesday, Mr Carter handed the medals to Dave Wright, an expert medal mounter who has operated Dave Wright Militaria and Collectables in Ballarat for more than 30 years.

“A lot of people came back from the war disillusioned and traumatised by what had happened. To them, the medals were a tragic reminder of what they had seen,” Mr Wright said.

“In those days, there wasn’t the same type of garbage collection that there is now.
“What happened was a lot of people would throw them out in the garden because they were too painful to keep. They didn’t realise the historical significance of the medals.”

According to the Australian Defence Department, the medals would most likely go to Mr Crone.

“Fred was George’s next of kin so, as the regulation stands, the medals should go to the closest living relative of Fred,” Mr Carter.

​However, other ideas including permanently showcasing the medals at the Creswick RSL have been flagged.
Mr Carter said members of Private Bailey’s family would meet in the coming weeks to discuss the fate of the medals.
Presentation of lost WWI Medals of Private George Bailey.

At the Dawn Service ANZAC Day 2015, Creswick-Smeaton RSL President Alan Morris spoke about a local bloke who joined the AIF on 12 April 1916 at the age of 35.

He was a miner here in Creswick.

When he joined he was assigned to the 39th Battalion, 3rd Reinforcement  of the AIF.

The 39th Battalion was formed at the Ballarat showgrounds on 21 February 1916 and drew most of its recruits from the Western districts of Victoria.

He embarked from Melbourne on board His Majesty’s Australian Transport  Shropshire on 25 September  1916 and eventually made his way to France.

On 3 Mar 1917 he was hospitalised with a severe foot condition, this was  probably aggravated by all the footslogging through the mud he and his mates had to do.

16 Mar 1917  he re-joined  his Battalion and continued to fight in the trenches.

His punishment would have been completed on  5th June.

Three days later  on the 8th June he was killed in  action. He was gassed at  Messines  in Belgium.  His age was  36 years.

Mr F Bailey of Napier St Creswick was on Tuesday informed by the Defence Dept that his brother Private G Bailey had been killed in action on the 8th June. The flag at the town hall was flown at half mast and regret was expressed by friends of the family at the sad occurrence.

George is buried at the Messines War Cemetery which is about 5 Km south of Ypres, in Belgium.

Alan presented the restored medals to Jim Crone who is the grandson of Frederick (George’s brother). Later that morning Jim marched with the RSL wearing the medals.

In the afternoon at the RSL Hall, at a function to recognise those who have assisted the RSL in making Creswick 1915 a success, Jim Crone presented George Baileys medals back to the RSL to be put on display. 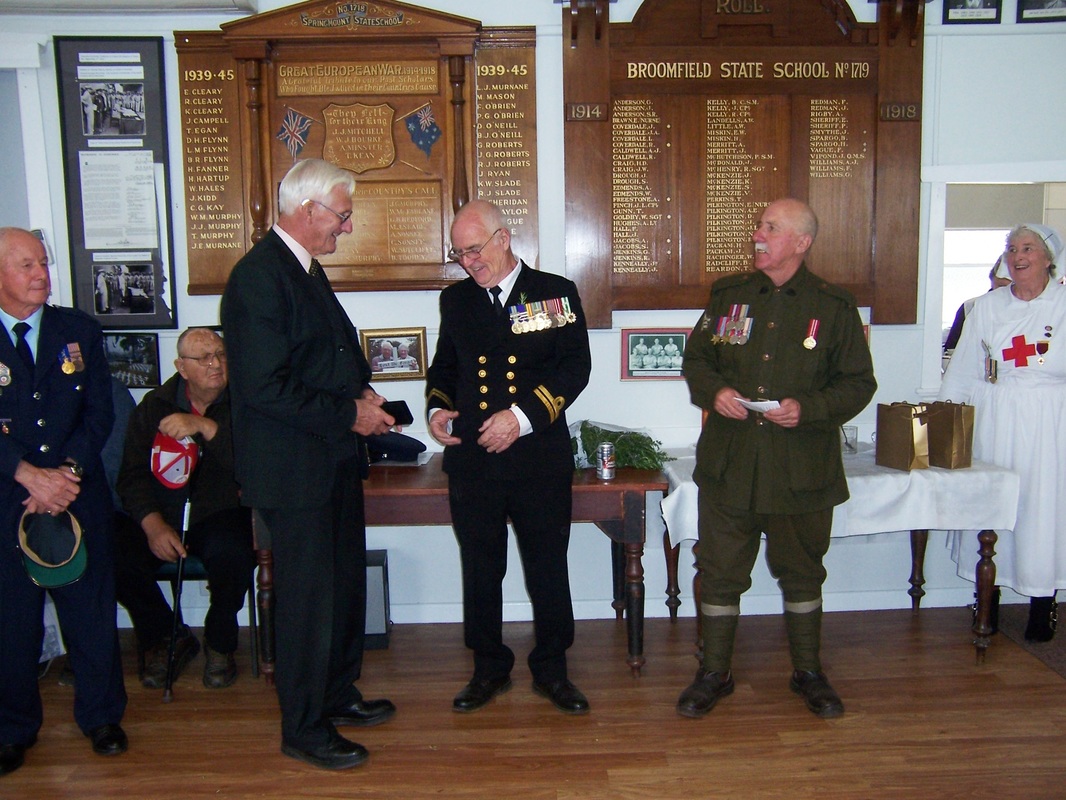 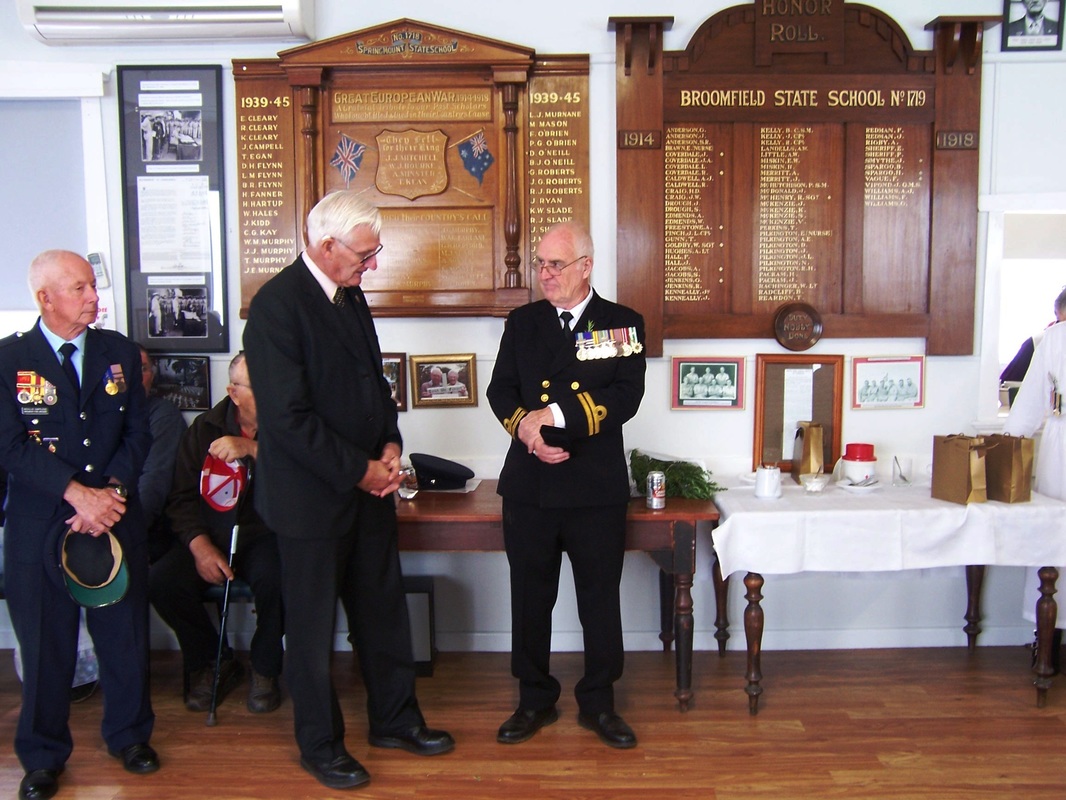 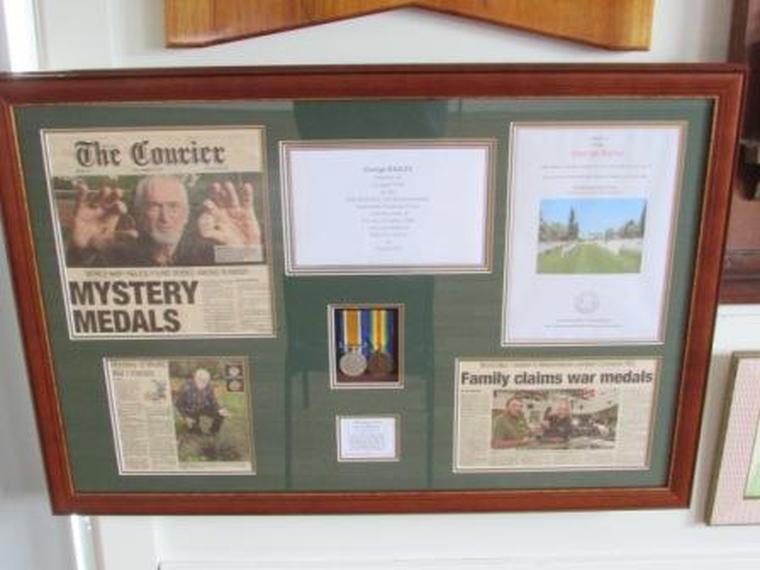