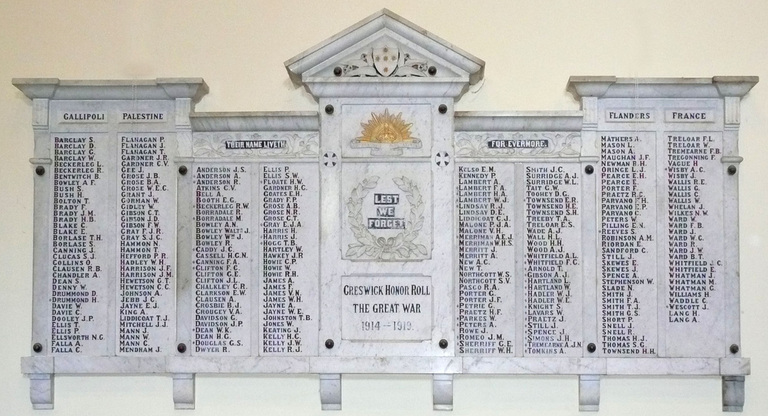 The proceedings at the Fallen Soldiers’ Memorial will commence at 3 p.m., when wreaths will be placed on the memorial by Lady Peacock and the Mayoress (Miss Cushing). Creswick and District Schools, Returned Soldiers, Lodges, and other organisations and individuals are invited to also place wreaths thereon.

An adjournment will be made to the Town Hall, when the Honour Roll will be unveiled.

The commemoration of Anzac Day in the borough of Creswick was carried out in a fitting manner on Sunday last, being the eleventh anniversary of the memorable landing of the Australian and New Zealand soldiers on the shores of Gallipoli. The Mayor (Cr. T. Cushing) had arranged for a gathering at the Fallen Soldiers’ Memorial, to permit of wreaths being placed on the stone of remembrance, and addresses being given. However, showery weather prevailed, and it was agreed that the later be given in the town hall, where the Honour Roll was to be unveiled. At 11 o’clock in the morning the fire bell was tolled. Flags were flown at half-mast

Despite the unpropitious weather, there was a good attendance of town and country residents at the memorial in the afternoon. The Mayor announced that the proceedings there would be brief on account of the rain and cold. He expressed pleasure at seeing so many present to assist in commemorating the deeds of their boys. Lady Peacock and the Mayoress (Miss Cushing) would place wreaths on the memorial on  their behalf. A large number of wreaths, crosses, and other floral tributes were deposited on the monument, after which Mr. Willie Fargher sounded the Last Post.

Fresh life into the honour of Creswick

Honour: Creswick historian Phil Greenbank has won a grant to have the massive marble honour board restored by an expert. Picture: Amber Wilson
​
WHEN it was first erected on Anzac Day in 1926, Creswick’s marble honour board was the pride of the township.

Made of five panels of marble and emblazoned with the names of the young men from the district who served in WWI, the board was duly placed in Creswick’s most eminent building – the town hall.
Fast-forward 90 years, and while the board is still resplendent, it has lost some of its shine of yesteryear.

But local historian Phil Greenbank plans to change that.
Not only has Mr Greenbank been studying hard in the art of cleaning honour boards, he has successfully won grants to have Creswick’s boards professionally restored.
That includes not only the marble honour board in the town hall, but another two the RSL has acquired from a church in the region.

Mr Greenbank meticulously cleaned the marble board using the special techniques he learnt, and now the board is looking more radiant than it has in many years.
He said it was important not to use harsh detergents on the marble surface but instead clean meticulously with fine-bristled paintbrushes and baby shampoo.
“It looked like it hadn’t been cleaned in a decade,” he said.
“It actually shines now.”

However, as the board is made of marble and is porous, it has absorbed some contaminants over the years, received a little damage from paint and other substances, and has lost some of the ink in its lettering.

A restorer will spent some months restoring the board as of August, a job so time-consuming that it will cost upwards of $8000.
But luckily, Mr Greenbank’s funding bid will cover the costs.

He has also won another two grants worth $2000 to restore the other two honour boards.
Mr Greenbank said it was vitally important to protect and preserve Creswick’s rich history for future generations.

“Like most of the stuff in this town, the town hall still has the original character of when it was first built,” Mr Greenbank said.
​
“This honour board is one of the biggest ones around. Most of the boards are timber ones. This one is very, very special.
“You can’t take away the history of a town.”

Mr Greenbank said the Creswick-Smeaton RSL would also take over maintenance of the board, away from the Hepburn Shire Council.

A Creswick Honour Roll dinner will be held in Creswick Town Hall on May 13 at 7pm.